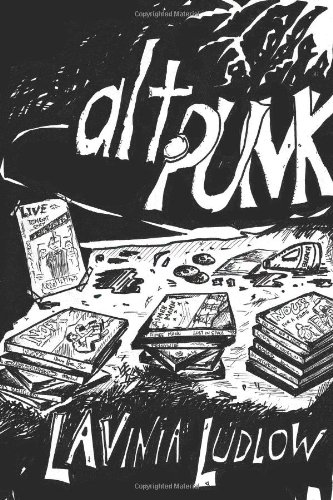 Generational literature, by definition, runs the risk of a limited audience and a short shelf life. With rare exceptions (think: Less Than Zero or Catcher in the Rye), these types of novels can’t gain enough altitude to transcend their self-imposed boundaries and speak to a wider readership.

Lavinia Ludlow should be given credit for trying mightily to meet this challenge in her debut novel, alt.punk, in which her post-punk-era heroine finds herself caught between the excesses of youthful rebellion and the bleak territory of post-30 adulthood. “All I see is life without parole in a resentful marriage with a parasitic family,” Hazel tells us as she contemplates her future at the beginning of the book.

Hazel, who narrates her struggles in a caustic, hypercritical voice that verges on constant whining, is half-heartedly trying to fit into this strange new world by taking a steady job as the manager of a chain department store in her native Sacramento and carrying on a limpid affair with an aspiring actor whom she supports financially, while attempting to keep the peace with her Oprah-and-manicure obsessed mother. Hazel has slipped low enough on the self-esteem ladder that she suffers from chronic hypochondria, so severe that she spends her free time disinfecting the walls of her apartment and taking bleach-laced baths to deal with her germ phobias.

Ms. Ludlow sets her story in motion when Hazel attempts to find her way out of this limbo by way of a disastrous relationship with the psychiatrically fragile Otis, the lead singer of a punk band called Riot Venom, whom Ms. Ludlow seems to have crafted on the Kurt Cobain model of self-destruction.

It’s in the middle section of the book, in which Hazel descends into punk hell as she joins Otis for the band’s first national tour, that Ms. Ludlow begins to lose control of her narrative in favor of graphic descriptions of the bad sex, bad drug reactions, and the effluvia that issue from various human orifices as a result. It’s as if she’s constantly trying to top herself on the gross-out scale, a kind of William Burroughs Lite, as she observes Otis’ descent into psychosis and Hazel’s belated realization that she fits no better in his world than the one back in Sacramento. The excess grunge is a pity, because Ms. Ludlow shows real talent in her sharp, funny, often lacerating dialogue and in her acutely observed characters.

Otis, in his more lucid moments, waxes positively poetic in his loyalty to the punk ethic. “We feel the highest and the lowest,” he tells Hazel at one point. “Why would we want to be stuck in the middle and never feel anything?” Otis’ brother and watchdog, Landon, hides a tender heart under a tough hide, slowly revealed by Ms. Ludlow in her most artfully crafted character and the one who encourages Hazel’s writing habit, going so far as to find her an agent and an editor to shape the novel Hazel eventually publishes.

But much of this talent is buried so deeply under the layers of grime, slime, vomit and ooze Ms. Ludlow ladles out with a shovel that some readers may not want to dig around in the filth to find any treasures hidden there.

Otis, along with Riot Venom, eventually falls victim to the stresses of true punk as Hazel retreats to her bleach-cleansed apartment in Sacramento, suffering her own psychic implosion with, it is hinted, eventual recovery. “I’ve come to realize that I’ve grown out of the story, the style of writing, the voice, the immature concepts,” Hazel says at one point of her developing novel.

One hopes that Ms. Ludlow’s future work takes that observation to heart and brings her intriguing talents into sharper focus.