The Paris Correspondent: A Novel 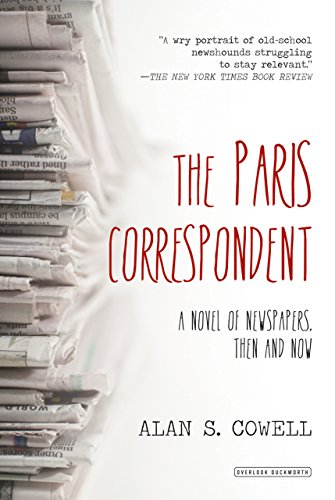 “Unlike most of the news stories we read these days, The Paris Correspondent provides a satisfying ending, with truth served and the honor of the journalism profession upheld—even if Mr. Cowell pulls an odd switch at the end and makes Joe Shelby address us directly, a jarring change in narrative tone.”

In The Paris Correspondent, longtime New York Times journalist Alan Cowell undertakes for a second time the risky task of turning his professional life into fiction.

The danger lies in paying too much attention to the nuts and bolts of the news business he knows so intimately, evolving rapidly from print to digital, and not enough attention to the nuts and bolts of writing fiction, namely character and plot development. For the most part, though, Mr. Cowell meets the challenge in this second novel featuring the renegade newsman Joe Shelby, whom we first met in Mr. Cowell’s 2003 debut novel, A Walking Guide, and who returns in The Paris Correspondent.

Eight years on, the neurological disorder introduced in the earlier book has progressed to the point where Joe needs a cane to painfully maneuver his way around Paris, but his love of the news business and his attachment to the old days of telexes and cold, hard print remains as strong as ever. And, as in the first book, he’s involved in a love triangle that ends this time in a newsroom confrontation involving arson and an AK-47.

But unlike in A Walking Guide, Joe never talks to us directly, for Mr. Cowell has introduced an alter ego in The Paris Correspondent’s Ed Clancy, who stands between us and Joe as he reports the unfolding story in a punchy, no-frills style that brings to mind cigar-chomping reporters and clacking typewriters.

It’s clear Ed, like Joe, still nurtures a fondness for the old days even as he is making the transition to the digital world as an editor for The Paris Star, a news website that one assumes is the stand-in for NYTimes.com, for which Mr. Cowell now serves as a Paris-based senior correspondent. “Newspapers were dying the death of a thousand cuts,” Ed laments. “So many titles had disappeared from the newsstands, replaced by websites or not at all.”

The observer/narrator device Mr. Cowell adopts in The Paris Correspondent works against him for the first half of the book. Ed Clancy doesn’t snap into focus as a fully-formed character until late in the story, remaining until then a passive reporter indulging in sometimes lengthy digressions into the minutiae of the news business, right down to the kind of software program he uses to write and post articles on the American-owned Paris Star’s website. But as the emotional drive of the plot begins to pick up steam, Ed Clancy becomes more of an active participant in it; even, by the end, a hero.

While Joe deals with his guilt over abandoning Faria Duclos, his love from the first novel and now a nearly helpless invalid, Mr. Cowell gets in his digs at the myth of the impartial reporter and the threat of corporate dominance of news gathering, painfully evident in the 2011 cell phone hacking scandal in Britain by Rupert Murdoch’s now-defunct News of the World.

As the 2008 financial crisis begins to unfold in The Paris Correspondent, Joe Shelby observes “We are influencing this story. We are telling people markets are down. So they pull their portfolios . . . so the markets go down further. They believe us. We can make it come true. We can make events happen by saying that they already have.”

Unlike most of the news stories we read these days, The Paris Correspondent provides a satisfying ending, with truth served and the honor of the journalism profession upheld—even if Mr. Cowell pulls an odd switch at the end and makes Joe Shelby address us directly, a jarring change in narrative tone.

And throughout the book, the British-born Mr. Cowell’s obvious love of Paris softens the sometimes hard-edged, cutthroat world Joe, Ed, and Mr. Cowell himself inhabit.