The Subtle Body: The Story of Yoga in America 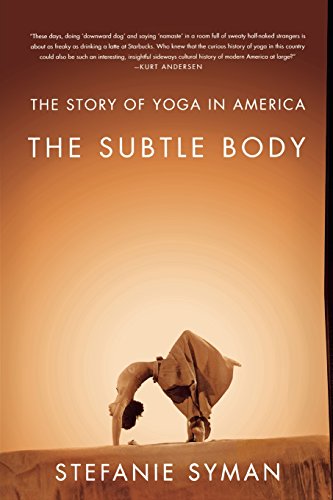 IIn the small town where I live, not so many years ago conservative religious groups raised a ruckus when the local school board proposed adding yoga to the district’s physical education curriculum. Words like “heathen,” “pagan,” and “cult” were used to such effect that the school board backed down. But times and attitudes have changed, and now yoga is offered not only in schools, but at the local YMCA and the fitness center downtown—a phenomenon so common in nearly every city and town throughout the country that estimates of the number of Americans practicing yoga now range between 15 and 25 million.

Given yoga’s ubiquity in the United States for more than a generation, it’s surprising that it’s taken until now for a full-length study of the Americanization of yoga to appear, a task undertaken by Stefanie Syman in The Subtle Body: The Story of Yoga in America. Like yoga itself, Ms. Syman’s book is wide-ranging, flexible in its outlook, and satisfying in its inclusiveness, even if Ms. Syman never really defines what, exactly, yoga is. She may be a victim of that inclusiveness, for as anyone coming to yoga for the first time discovers, there are a bewildering array of yoga flavors—from meditative poses to aerobic straining—each claiming to be inspired by authentic ancient traditions.

So what is yoga? The word is derived from the Sanskrit for “union,” but depending on who one talks to, what is being united is either the body and mind, or the individual consciousness with the divine, or the nascent energy residing at the bottom of the spine rising through a network of invisible energy centers—the “subtle body” of the book’s title. “Yoga is so massive and complicated,” Ms. Syman writes, “so contradictory and baroque, that American society has been able to assimilate any number of versions of it, more or less simultaneously.”

The story of yoga in America, according to Ms. Syman, can be traced all the way back to Emerson and the Transcendentalists in nineteenth century Concord, Massachusetts. Emerson’s long poem “Brahma,” drawing on garbled translations of Hindu texts, set off a flurry of interest in Eastern philosophies, while Ms. Syman considers Thoreau as a kind of homegrown yogi, practicing an ascetic lifestyle on Walden Pond, including vegetarianism, and later writing of what certainly sound like deep meditative states.

The arrival from India twenty-five years later of Swami Vivekananda to attend the World Parliament of Religions at the Chicago Exposition of 1893 heralded the first direct injection of traditional Indian philosophy into American culture, although Vivekananda soft-peddled the more esoteric aspects of the discipline for his western audiences.

In her ensuing chapters, Ms. Syman introduces us to a host of colorful, one might even say entertaining, characters—self-styled American swamis including Pierre Bernard, who the American press dubbed “The Great Oom;” Bernard’s half-nephew Theos Bernard, who became famous for his astounding demonstrations of difficult yoga positions, or asanas, and his adventures (some fabricated) in India and Tibet; and Margaret Woodrow Wilson, the twenty-eighth president’s daughter, who decamped to Sri Aurobindo’s ashram in India and died there after leaving an unsuccessful singing career back home.

There are excursions through post-war Los Angeles, where Alan Watts, Aldous Huxley, and Christopher Isherwood indulged in eastern mysticism; and for those of us of a certain age, Ms. Syman’s chapters on Timothy Leary, Richard Adler (later Ram Dass), Allen Ginsberg, and the sixties counterculture are particularly resonant.

Ms. Syman makes clear that yoga adapted itself to American culture as the times demanded; its spiritual aspect came and went according to the times, while the physical exercises (strictly speaking, Hatha Yoga, as opposed to the more meditation-oriented Raja Yoga or devotional Bhakti Yoga) waxed and waned according to the culture’s interests.

The book, in fact, is really a cultural history of the United States as seen through the lens of yoga which, as Ms. Syman points out, “is one of the first and most successful products of globalization,” one of the first threads that wove an isolationist, largely rural population into the fabric of the larger world. Because of it, we breathe, we bend, we reach out from somewhere deep inside ourselves, and we try to connect.