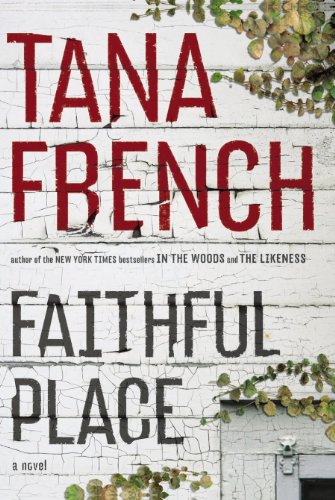 Near the end of this third suspense novel by the Irish writer Tana French, her rough-edged undercover cop Frank Mackey observes, “Nobody in the world can make you crazy like your family can.”

In Frank’s family, going crazy can have fatal consequences, as we learn in Ms. French’s absorbing story rich in the characters, smells, and noises that inhabit Faithful Place, a shabby road in a down-at-heels section of Dublin called The Liberties. In her two previous novels—her Edgar-winning debut In The Woods and The Likeness—Ms. French embarked on what promises to be a series of linked novels with characters in common, chiefly revolving around Dublin’s detective force. Frank Mackey appears as a secondary character in The Likeness, and now steps center stage as the narrator for Faithful Place.

Frank is the black sheep of the raucous, cynical, and sharp-tongued Mackey clan, and is regarded with such deep suspicion for having become a cop that he hasn’t been back to the old neighborhood for 22 years. But he’s pulled back into the family maelstrom by the discovery of the long-buried body of the girl with whom—two decades earlier—he had intended to flee to a better life in England.

Despite Frank’s vinegar-soaked observations of his family and the world they inhabit, Ms. French uses a clever device to keep us on his side in the form of his nine-year-old daughter, Holly, the child of Frank’s former marriage to Olivia, a woman several social ranks above his own humble origins. Frank’s conversations with, and thoughts about, Holly help us understand his fluid and pragmatic moral universe as he sets about investigating the cold case murder; and it’s Holly who holds the clue to a second murder that’s even closer to home.

But Ms. French’s whodunit plot is really just a framework for exploring the conflicting pressures, jealousies, hatreds, and underlying strengths of a spectacularly dysfunctional family, a portrait that’s pushed close to, but never past, the boundary into caricature.

Ms. French is a trained stage actress and the book’s 400, dialogue-dense pages sometimes read almost like a script, to the point where narrative-driven readers may grow impatient. But it’s that same dramatic training that is Ms. French’s great gift, for she creates fully formed characters with great efficiency and clarity. There are occasional nods to the cop noir genre in Chandler-like descriptions of characters (Ms. French characterizes the allures of Frank’s ex-wife, for example, with “The Pope himself would have whipped off his skullcap to mop his brow.”); and American readers will revel in the lower-middle-class patois and inventive vulgarities that pepper the abundant dialogue, as rich a verbal stew as Yiddish.

But Ms. French’s most impressive triumph in these pages is her creation of Holly, who must learn to navigate the treacherous shoals of deadly family rivalries with her rule-bending father as her only guide. “I don’t want this!” Holly laments, when she discovers she may be responsible for sending someone she loves to jail for two murders. “I want everyone to go away and leave me alone.” But families never leave you alone, and so we have to learn to survive.