An Object of Beauty: A Novel 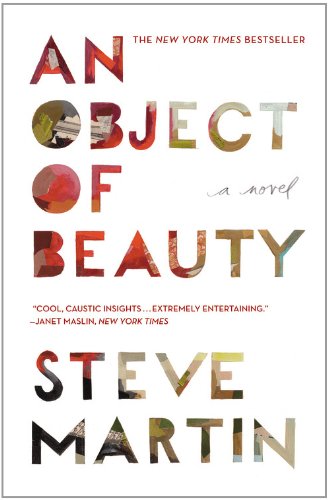 Halfway through Steve Martin’s third novel, An Object of Beauty, his anti-heroine Lacey Yeager discovers she may be implicated in a major art theft involving stolen works by Vermeer and Rembrandt This possibility will likely negatively affect her budding career as a dealer for a respected Manhattan gallery.

But Lacey’s made of sterner stuff, and rather than quivering with apprehension, “She began to imagine what she would wear on the witness stand, her handkerchief in her hand to catch a sudden flood of tears, and the dinner parties she would be invited to.” There is no bad publicity, as far as Lacey is concerned, as long as one is talked about by the right people, which is a fair summation of the rarified world of multimillion-dollar art deals that Lacey so eagerly seeks to conquer.

Lacey is the vehicle Mr. Martin has invented for this sardonic tour of the heated New York art market of the 1990s, familiar territory to him as a longtime collector of contemporary American art and as a trustee of the Los Angeles Museum of Art. Further, Mr. Martin uses that world as a metaphor for the financial bubble that burst so catastrophically two years ago, but that in its heyday saw newly enriched, prestige-seeking collectors buying up Picassos and Diebenkorns for hundreds of thousands, and then many millions, of dollars.

The novel spans nearly twenty years, taking in the over-hyped New York of the Giuliani years, the shock of 9/11, and the implosion of Lehman Brothers in 2008. This is an ambitious work paced at such a breakneck speed that some chapters are barely a page long, and peripatetic characters are either jetting off to auctions in Paris or London, speeding along the LIE for weekends in the Hamptons, or rushing from one gallery opening to another. Names are dropped with such frequency that the book sometimes reads like the Times’ society pages.

Occasionally lost in the rush is an actual story, with bits of the plot poking through from time and time, only taking center stage near the end of the book when a treacherous act committed by Lacey is revealed—one that might have helped us see her as a person rather than a literary device if it had been more front and center. Our distance from her is further complicated by the first-person framing structure Mr. Martin chooses to employ, telling Lacey’s story in the voice of a former lover—an old friend and successful art critic. His presence serves to provide occasional, although instructive, observations of the art market and the surface glitter, rather than serving as a viable understory.

This is the second time Mr. Martin has placed a woman at the center of his longform fiction, but unlike the reticent Mirabelle, the heroine of Mr. Martin’s exquisitely observed first novel Shopgirl, Lacey is a determined and cold-blooded social climber fascinated by the power of money, class, and sex. Mr. Martin seems to understand women, or is at least using his fiction to try to understand them.

Although the protagonist of his second novel, The Pleasure of My Company, is male, the story revolves around his relationships with three very different women, each dissected with the precision of a surgeon, and one of whom, a hard-driving, sexually alluring real estate agent named Elizabeth, could be Lacey’s prototype. The lineage goes back even further, though, all the way to the relentlessly manipulative Becky Sharp of Thackeray's Vanity Fair. Lacey and her literary sisters know it’s a man’s world and do battle with a full armory of weaponry.

Shopgirl and The Pleasure of My Company were such successes that one wishes Mr. Martin had paid more attention in this longer work—as he did in those earlier and shorter ones—to the basics of storytelling, focusing a bit less on the surrounding milieu.

Still, for those who are familiar with the New York of those boom years, there is much here to pull the heartstrings. There are lovely evocations of what Manhattan could offer in those days to those with money to pay for it. With Mr. Martin as our guide, we stroll along upper Madison Avenue, stopping in at Gagosian or Hirschl & Adler to see what’s on offer; we stop for an espresso at Sant’ Ambroeus, or sip an afternoon aperitif at the late lamented La Goulue. With him, we rush downtown to revel in the avant garde Chelsea art scene, crowding into the stuffy lofts and storefronts of new galleries, clutching our plastic cups of cheap wine, before retiring to our luxury suite at the Carlyle.

Mr. Martin leaves it up to us to decide which is our own personal Object of Beauty—the provocative Lacey, for some of us; for others, a fine Old Masters painting seen in a hushed private gallery; for still others, a radiant, exciting, lofty New York that will never be again.

Beauty is where each of us finds it, however unlikely or unusual; and Mr. Martin shows us that when it comes to works of art, that means there’s money to be made.