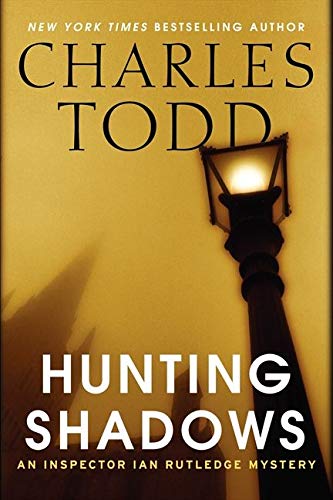 “One wishes for the case that will somehow provide a breakthrough to alleviate the suffering that hangs over these stories like a dark shroud.”

The horrors of World War I once again loom over the pages of this 16th installment in the long running Inspector Ian Rutledge mysteries by the mother-and-son writing team of Charles and Caroline Todd.

First Introduced in 1992s A Test of Wills, Rutledge is one of the bleaker creations in the long history of the village mystery. In that first book, he’d just returned to his former job as a Scotland Yard Inspector after a brutal tour of duty in the war, suffering from what we would today call Post Traumatic Stress Disorder as he travels to lonely corners of Britain on his round of murder cases.

In this latest outing set in 1920 and four years after Rutledge’s first case, he’s dispatched from Scotland Yard to investigate two apparently unrelated killings in the marshy fen country of Cambridgeshire. One of the victims is shot dead by an unseen sniper during a wedding in the cathedral town of Ely; the other is similarly dispatched during a political rally at a nearby village.

As in each of the preceding novels, Rutledge’s solution to the case draws on the aftermath of the war just ended, reawakening his tortured memories to such an extent that at one point in the story he’s forced to retreat to the dark silence of the cathedral to wrestle with his demons.

“The guns faded, the shouts and screams, the firing that had seemed to reach a crescendo in his head,” the authors write. “And then it was over. He took a deep breath and, badly shaken, buried his face in his hands.”

Also returning in this new Rutledge mystery is the ghostly voice of Hamish McLeod, the Scots sergeant executed for insubordination after refusing to obey Rutledge’s order to lead his men to certain death across the deadly trenches of the Battle of the Somme. McLeod’s spirit inhabits Rutledge’s mind like a burrowing worm with its acerbic, Scots-burred observations that often help Rutledge find his killer.

But such is the guilt that Rutledge suffers over McLeod’s death that we are once again reminded, as we have been in previous novels, of the cleaned and loaded service revolver Rutledge keeps handy as the ultimate means to silence McLeod.

The Todds are by now accustomed to weaving this underlying story into each new mystery, although Rutledge can be heavy going as the reader’s companion for three hundred and more pages. The man has virtually no sense of humor, no dimensions outside of his wartorn psychology, and no long-lasting relationships.

There have been two women in his life—one, to whom he was engaged before going off to war, Rutledge gallantly released from her vow on his debilitated return from the trenches; the other left him for the husband she thought had died.

All of this emotional burden makes for grim reading as Rutledge travels from one suspect interview to the next, confers with local police officials, and peers through the mists and fog of the fens in pursuit of clues in the tradition of Golden Age British mysteries.

The rich atmosphere for which the Todds are known is still in evidence, in the form of a local legend of a spectral hound, a monstrous face glimpsed through a window, the ancient history of the fens, and village gossip offered with the biscuits over endless cups of tea.

But Rutledge’s condition has remained unchanged from book to book, and one wishes for the case that will somehow provide a breakthrough to alleviate the suffering that hangs over these stories like a dark shroud, obscuring the pleasure of a mystery solved.

“Most of us need a way out,” a fellow sufferer tells him during the course of Hunting Shadows. One hopes the way out for Rutledge is something other than a shot in the dark.