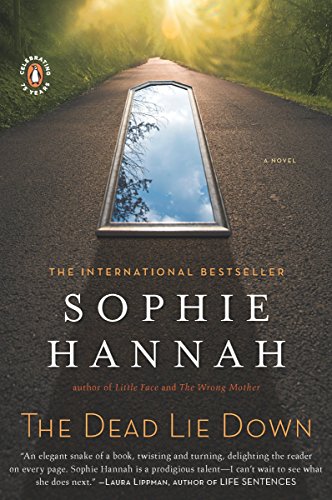 In the course of Sophie Hannah’s suspense novel The Dead Lie
Down, one character sprays red paint into the face of another during a
physical assault; a disgraced police sergeant chooses her engagement
party as the occasion to ridicule a guest in a particularly embarrassing
way involving a vibrator; another ends up bound to a stone garden
ornament with dirt being shoved down her throat by a demented client;
and the book’s one murder victim dies in a particularly gruesome manner
involving a hammer, framing nails, and the little hooks used to hang
pictures. These are not the kind of people who invite intimacy, a
condition that underlies this intricately plotted story involving
shifting identities and barely concealed animosities among co-workers
and even lovers.

The British Ms. Hannah, a respected poet as well as the author of
three previous novels of psychological mystery, has a loyal readership
in Britain but has yet to find her audience here. (A fourth book was
published in the U.K. this spring.) Part of the reason may be that we
already have a lively, home-grown market in the woman-in-peril genre
into which Ms. Hannah’s books may be slotted; and Ms. Hannah, at least
judging from this book, has yet to find her way to the elevated and more
emotionally resonant work of her countrywomen Ruth Rendell and P. D.
James. And what little redemptive resolution concludes the book can’t
erase the bleakness of the preceding four hundred pages. One notes that
Ms. Hannah’s prize-winning volume of poetry bears the title Pessimism
for Beginners.

The Dead Lie Down, set amid the dreary council estates
and greasy pubs of suburban London, begins with an ingeniously
compelling conceit: a once promising artist reduced to designing frames
for other artists’ work confesses to a long-ago murder, even though his
co-worker and lover discovers the supposed victim is apparently alive
and well (although “well,” in Ms. Hannah’s world, is a relative term).

The emotionally fragile woman to whom the supposed murder is
confessed has her own issues to deal with, not helped by the skeptical
and ultimately rude reception given her story by Ms. Hannah’s other
female protagonist, police sergeant Charlotte “Charlie” Zailer.
Charlie—a bundle of simmering grudges and sarcastic observations mostly
aimed at her detective-fiance Simon Waterhouse—is also bound by a
troubled past, both professional and personal, that got her removed from
the detective force and reassigned to community relations.

Ms. Hannah switches back and forth among these three main characters
to unravel the threads of her complicated story that encompasses the
lower reaches of London’s art scene, childhood sexual abuse, the fine
points of picture framing, garden design concepts, and even a brief
visit to a meeting of Quakers. The dialogue is frequently in the form of
argument; the narrative occasionally sinks under the burden of pop
psychology meant to lend credibility to the characters’ motives.

“I grew up thinking the world was made up of goodies and baddies,”
Ms. Hannah told Britain’s The Independent this past spring. “But nobody
is the baddie in their own heads.” That becomes apparent by the end of
The Dead Lie Down, but even then it’s hard to tell if there are, in
fact, any of the goodies left standing.