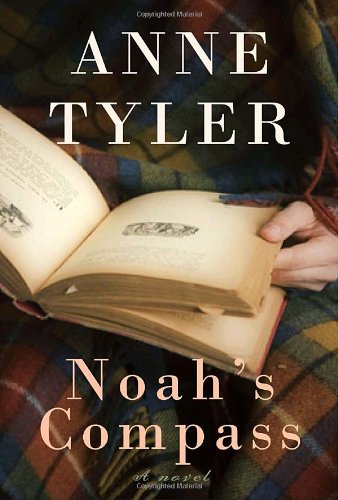 Is Anne Tyler feeling her age? Arriving at her late sixties after four decades of writing exquisitely observed novels about the challenges and triumphs of middle class families, Ms. Tyler’s eighteenth novel, Noah’s Compass, seems resigned to the ossifications of later years.

Like many of his predecessors in Ms. Tyler’s work, we first meet sixty-year-old Liam at a turning point in a life that’s seen him once widowed, once divorced,divorced and now intent on simplifying his life after his teaching job at a private boys’ school has been eliminated. He’s moving into a somewhat down-at-heels apartment complex after inhabiting a comfortable bachelor apartment in a better part of Baltimore, where Ms. Tyler has lived for most of her writing life and where much of her work is situated. Also like his fictional forebears, the underpinnings of Liam’s life are falling away—not only has he lost his job, but his ex-wife has a new boyfriend and two of his three daughters have become distant and impatient with him. Also like his literary ancestors, a random act of violence sends him off in an unexpected direction. Liam goes to bed for his first night’s sleep in his new digs, but wakes up with a bandaged head in a hospital room, the victim of a botched burglary of which he can remember nothing, an event that takes place barely three pages into the novel and which Ms. Tyler deploys as her plot’s catalyst.

So far, we’re on familiar Tyler ground, territory increasingly shaped by family dynamics as Ms. Tyler’s focus has shifted from the individual struggles of her earlier novels to the sibling and conjugal pressures of her later ones. In 1985’s The Accidental Tourist, a winner of the National Book Critics’ Circle award, Macon Leary’s grief at the death of his son drives him away from his wife and into the arms of the eccentric Muriel. In Ms. Tyler’s Pulitzer Prize-winning novel of 1988, Breathing Lessons, a death sets Maggie Moran on her wobbly journey to self-discovery; and in 2004’s The Amateur Marriage, a fragile 30-year partnership collapses in divorce precipitated by the drug addiction of a child. By the time she wrote her immediately previous novel, Digging to America, her most ambitious and socially resonant story, Ms. Tyler had come to focus entirely on family life, introducing in that work two families randomly connected by the adoption of two Korean orphans.

In Noah’s Compass, however, Ms. Tyler seems to be withdrawing from the family room. Liam, already connected only tenuously to family at the beginning of the book, intends to live out the rest of his days in reading the philosophers he once taught, shuffling back and forth to the recycling bin, and watching the changing light in the pine trees outside his sparse new living quarters. His intended withdrawal doesn’t even make room for a television. “He had accomplished all the conventional tasks—grown up, found work, gotten married, had children—and now he was winding down,” Ms. Tyler writes of Liam. “This is it, he thought. The very end of the line.”

It isn’t, of course, as Liam deals with the unwanted solicitations of his ex-wife and daughters after his nocturnal bashing and embarks on a campaign to recover the memory of what happened that night. This is Ms. Tyler’s opening to introduce another of her trademark, slightly ditzy female characters in the person of Eunice, a 38-year-old caregiver to a doddering, forgetful corporate tycoon, whose chief job it is to jog the old man’s memory and get him to his appointments on time. She is, as Liam sees it, a “rememberer” and the one who can help him recover the night that changed his life. We seem headed for an engaging older man/younger woman romance, a heartening reversal in Liam’s emotional withdrawals, but Ms. Tyler chooses another path, filling the penultimate chapter of the book with a flood of back story for Liam in an attempt to explain his choices.

Although Noah’s Compass is as artfully crafted, as full of compassion and as sparkled with wry humor as any of Ms. Tyler’s previous work, Liam is ultimately a passive hero who ends the novel, as he begins it, as absent from his own life as the details of the burglary remain absent from his memory. Ms. Tyler gives Eunice a secret revealed to Liam three-quarters of the way through the book, not exactly a shocker but one that presents Liam with a choice: embrace life’s more messy dimensions or retreat from them into sterile seclusion. Liam’s choice, although leavened somewhat by Ms. Tyler’s late-in-the-game invention of a new job and the permanent residence of his youngest daughter, leaves us feeling flat and unfulfilled, as if we have joined Liam in that dreary apartment, waiting for nothing.