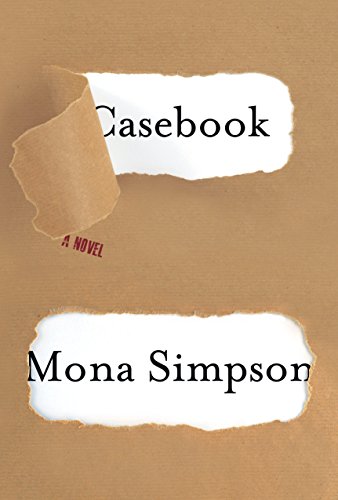 “Mona Simpson once again proves herself a master . . . when describing the double-edged sword of human affection . . .”

In Casebook, her sixth novel, Mona Simpson returns to the intimate universe of home and family and creates another of her inventively realized characters in the person of Miles Adler-Hart, an obsessively curious nine year old when we first meet him, hiding under his parents’ bed listening to the first of the many arguments he will overhear. “I was a snoop,” Miles confesses, “but a peculiar kind. I only discovered what I most didn’t want to know.”

What Miles discovers during the decade spanned by the novel is the disintegration of his parents’ marriage and the hazards of relationships that prove disastrously unsuitable.

Miles is the juvenile successor to Ann Stevenson in Simpson’s debut novel Anywhere But Here, the 1986 book that established her reputation as a close observer of the fragility of human nature, so easily ruptured by false intimacy, betrayal or just plain boredom. And it was in Anywhere But Here that Simpson first staked her claim to southern California as a deceptively sunny backdrop for her domestic dramas.

Casebook finds us in Santa Monica as Miles and his best friend Hector are dealing with, in Hector’s case, his parents’ separation and In Miles’ case, his parents’ unraveling marriage headed for the same cliff. Miles and Hector turn out to be crack sleuths as the years pass by, starting with the rigged walkie-talkie under Miles’ parents’ bed in the opening chapter and moving all the way up to a sophisticated eavesdropping device wired into his home’s telephone system.

Simpson frames her story as a kind of mystery, with Miles and Hector as her detectives on the trail of broken promises and broken families. And while she tells her story in the plainspoken prose of the detective mystery, Simpson once again proves herself a master of integrating more complex and sometimes elusive writing when describing the double-edged sword of human affection, capable of inflicting sorrow as easily as it bestows joy.

As in her previous novels, author Simpson presents us with a suddenly single woman—“The Mims” is Miles’ nickname for his mother—forced to create a new life around her son and two younger daughters, whom Miles collectively calls “the Boops,” childish names to which Miles clings even when reaching young manhood.

The bewilderment that consumes Miles as the familiar collapses around him and as he surreptitiously records his mother’s increasing entanglement with another man is adroitly transformed in Simpson’s hands from a child’s innocent curiosity to the darker realms of teenage anxieties. “What was so-called romance?” a still-naive Miles wonders early in the book, as a new man appears in his mother’s life. “It seemed a lot like friendship, but with a fleck of sparkle.” Miles and Hector finally turn to a private investigator when “the dork guy” as they name the Mims’ lover, begins to arouse their suspicions.

Simpson tells her story in a tight, first-person narrative, sometimes forcing her to maneuver Miles into unlikely eavesdropping situations to communicate necessary information. She seems a little uncomfortable at times speaking in the voice of a young male instead of her usual female characters, lending a certain flatness to Miles rather than the fully textured voices of previous work.

But by the end of Casebook, when Miles and Hector discover a surprising outlet for their investigative talents, Simpson gives us a more substantial, sadder and more sensitive Miles who’s made his own romantic discovery in the person of a lovely former schoolmate who offers him her favors. “Once you’d felt this,” he muses, “you’d never want to go back.”