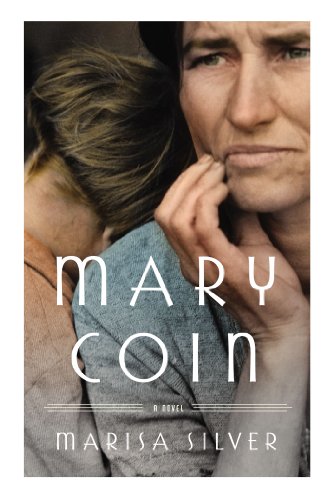 In 1936, Dorothea Lange, on assignment from the Roosevelt administration to document Depression era poverty, photographed a gaunt but defiant woman at a migrant farm workers’ camp in central California.

Of the many pictures Lange shot of Florence Thompson and her children, one in which Florence gazes into the middle distance, holding a baby while framed by two of her other children, quickly became a national symbol of the country’s suffering poor and has been endlessly reproduced ever since, even ending up as a postage stamp.

Now it serves as the factual foundation for Marisa Silver’s compelling third novel, in which Florence Thompson is given new fictional life as the titular Mary Coin.

Mary Coin and her difficult life journey from dustbowl Oklahoma of the 1920s to bustling San Francisco of the 1960s form the heart of the novel. These are connected by threads Ms. Silver carefully plays out to the present day and Walker Dodge, the scion of a once-prosperous California farming family; and to the middle 20th century and Vera Dare, Ms. Silver’s stand-in for Dorothea Lange.

The three characters’ lives all revolve around the moment Vera snaps the famous photograph, which comes midway through the novel. Years later, Vera views her most famous picture with the exploitative guilt of the journalist/photographer.

“It was more complicated than sex, than children,” Vera thinks as she remembers in old age the day she took Mary Coin’s photograph. “Or maybe it was the exact expression of those complications, which included intimacy and distance, holding and turning away, lies and never the truth.”

While Vera’s guilt defines her relationship to the picture, Walker’s is even more personal when he finds a yellowed newspaper article which bears the picture folded among the pages of his long deceased grandfather’s library. At first regarding the photograph, as everyone has for three generations, as part of the collective cultural patrimony, Walker soon unearths a much more intimate connection to Mary Coin and to one of the other three figures that appear in the portrait with her.

But Mary Coin remains the central focus of our sympathies, even when Ms. Silver occasionally pushes a bit too hard at the bleakness of Mary’s descent into the grueling struggle of the Depression’s migrant workers to survive.

The ravages of tuberculosis, the physical pain of picking cotton, the false solace of alcohol and sex mark much of Ms. Silver’s description of Mary’s plight; but when we near the end of the novel with an aged and ill Mary confronting her own photograph in a museum retrospective of Vera Dare’s body of work, our compassion for her is that much the greater.

“Time had begun to fold like a fan,” Mary thinks as she gazes at her younger, black-and-white self, “so that the past and present rubbed together in ways that made her feel supple and porous, more like a person in a dream than in life.”

Ms. Silver’s broad themes of identity and survival are effortlessly woven into this involving story of three characters struggling to find their way through poverty, physical disability and destructive relationships.

It is her great achievement in these pages to embody those themes in three characters so unlike each other in both temporal and social terms but like all of us, discovering comfort in the past and hope in the future.