The Orphan Choir: A Novel 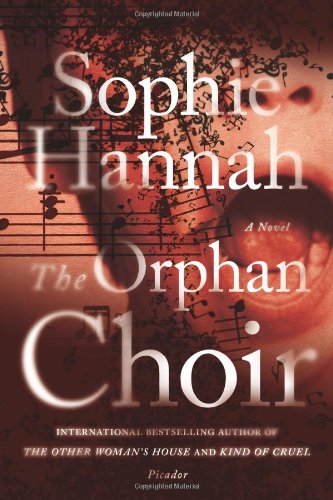 Elizabeth Bowen once noted that for a ghost story to have its proper effect its basic premise should have at least one foot on solid ground. Such a story, she said, should achieve its effects through “a series of happenings whose horror lies in their being just, just out of the true.”

The British writer Sophie Hannah seems to have taken Bowen’s advice to heart in constructing her decidedly spooky The Orphan Choir, an admirable first stab at the genre after a string of bestselling psychological suspense novels.

What could be more mundane than the problem facing The Orphan Choir's Louise Beeston, who tells us at the beginning of the story about her insomnia caused by the late night partying and blaring music of her next-door neighbor in the upper middle-class Cambridge neighborhood where she lives with her husband? So what if her voice on the page seems overly querulous, even a touch paranoid?

We've all had Louise's problem at one time or another, and the fact that the neighbor's favorite musical trumpet blast is of Queen's "Don't Stop Me Now" only inspires more of our sympathy.

After this initial setup, Ms. Hannah begins to gradually summon her spirits. Something else besides Queen is bothering Louise. Her 10-year-old son, gifted with an angelically sweet singing voice, is living away from home as part of a prestigious school choir at Cambridge University. While her husband stresses the social and educational opportunities the boy will enjoy, Louise sees it as a virtual kidnapping. Her only child’s absence fills her with emptiness and a growing sense of unease.

Soon the music keeping Louise awake at night is no longer Queen’s, but that of a children’s choir that only she can hear. Ms. Hannah cranks up the tension when Louise convinces her husband to buy a second home in a swank, gated community out in the country, far from neighbors with blaring boom boxes.

“I need two separate worlds,” Louise tells us. “If you only have one world . . . you have nowhere to run when you need to escape from it for a while.” That’s as neat a literary description of schizophrenia as you are likely to read anywhere.

But Ms. Hannah isn’t about to let us off the hook with so facile an explanation of Louise’s predicament, even when Louise’s move to bucolic Swallowfield at first seems to banish her spectral playlist of ecclesiastical hymns. The new house is called The Boundary, a name we will come to appreciate in the book’s later chapters as Louise learns more about her spectral choir and its meaning.

Louise is brittle, over-sensitive, deeply suspicious (although, as it turns out, of the wrong people), and blunt in her opinions; but Ms. Hannah relieves such a difficult personality by showing us that Louise is also highly intelligent and at times very funny.

Her mental riffs on some of the Anglican Church’s ritual prayers, one of which leaves her wondering if God is a Bolshevik, soften Ms. Hannah’s otherwise relentless narrative pace and tension. It’s like a brief spill of light from a candle in a darkened church, suddenly snuffed out and leaving us nervously looking over our shoulder.

Ms. Hannah’s earlier works, like The Dead Lie Down and Kind of Cruel, are bleak but powerful explorations of the inner demons that can infest the human psyche. In The Orphan Choir, Ms. Hannah uses those previous incursions into dark territory as the jumping off point for a full-throttled Golden Age ghost story, and one that is so meticulously plotted that the story’s final revelations deliver a suitably chill punch, a response Edith Wharton described as “a cold shiver down one’s spine.”

The effect is difficult enough to achieve in a short story, the form the genre most often takes, but Ms. Hannah manages the feat in this expertly paced and brilliantly conceived work.