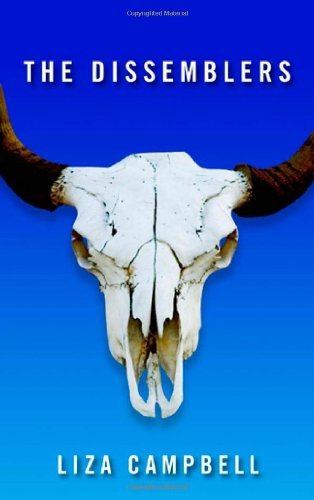 In this first novel, Liza Campbell takes on some fairly heavyweight themes, from the creative process to contemplations on death, and sets herself the challenge of exploring them through the narrow lens of a first-person narrative. It is very much to her credit that in fifty-nine short chapters and just under two hundred pages, she mostly succeeds.

Ms. Campbell chooses art forgery as the vehicle for her explorations, and the austere beauty of the American Southwest as the backdrop. She introduces us to Ivy Wilkes, an art school graduate obsessed with Georgia O’Keeffe who lands a job in the gift shop of the Santa Fe museum where much of O’Keeffe’s work is housed. “I never met Georgia,” Ivy tells us when she first speaks to us, adding confidently, “but I think we would have been great friends.”

While Ivy indulges her obsession by painting and drawing copies of O’Keeffe’s work as exercises in technique, her relationships with the young couple occupying the apartment above hers and with the owner of a downtown coffee-shop-cum-art gallery begin to weave themselves into the intricate threads of Ms. Campbell’s plot.

Two of her new friends are involved in an art forgery ring and quickly notice Ivy’s talent for mimicking O’Keeffe. “If two paintings look identical, why would the name of the painter make one more valuable?” Ivy wonders by way of rationalizing an opportunity to live vicariously as her artistic heroine, along with the easy money on offer. As the plot unfolds, and a mysterious man eventually appears to start questioning the museum staff about forgeries that have begun surfacing in New York, the flimsy support of this ménage-a-quatre is swept away by the lying and deceit that underlies it. Sexual betrayal plays a role, too, as the dissembling of the title eats further into the lives of Ms. Campbell’s characters.

In carefully wrought prose reminiscent of Alice Munro, Ms. Campbell displays a remarkable ability to shift from Ivy’s interior struggles and musings to the necessities of plot construction to propel the story forward, and uses the severe elegance of both O’Keeffe’s work and the desert environment that produced it to echo Ivy’s shifting loyalties.

Although the short chapters, a few of them just a paragraph in length, tend to interrupt the flow of Ms. Campbell’s writing, and although Ivy’s ruminations on art, love, aging and death at times wander off into the narrative wilderness, the carefully constructed emotional structure of the book draws us on until Ivy, retreating to an isolated cabin in the mountains where her forgeries are hidden, must come to terms with the consequences of her infatuation with O’Keeffe and her own future.

Ms. Campbell, through Ivy, explains how an artist works in layers, slowly adding color, line and form to a blank white canvas to create something that seems unified, coherent, of a piece. A painting is, in that sense, a deception. So has Ms. Campbell constructed this involving story, showing us how little falsehoods can produce a semblance of truth, until we look behind them, where there is just empty space.