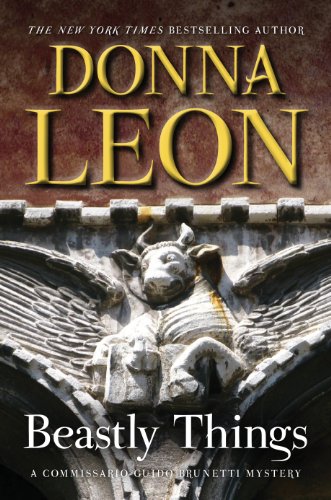 “Producing a Brunetti book every year for the last 20 years, Ms. Leon seems to be taking more shortcuts in her plotting in favor of more acute social commentary.”

One of the hazards facing the writer of serial mysteries is the plain fact that detectives, like everyone else, grow old. Donna Leon, whose Beastly Things is her 20th mystery novel in as many years featuring Commissario Guido Brunetti, faces her detective’s accumulating years head on as he investigates yet another mysterious and watery death in his beloved Venice.

This time out, the corpse has been dumped into a lonely canal after being stabbed to death, wearing only one shoe and carrying no identification; and as Brunetti goes about establishing who the dead man was and the reason for his murder, Ms. Leon lets us know that Brunetti’s advancing years are beginning to weigh heavily on him.

He’s worried about a sporadic tremor in his left hand. He takes a vaporetto whenever possible, instead of walking his investigative rounds. And he’s becoming increasingly pessimistic about the corruption, greed, and trampling tourism that plague La Serenissima. “The city grew dirtier, hotels proliferated and rents increased, every available inch of sidewalk space was rented out to someone wanting to sell unusable junk from a portable stall, and still the waves of promises to sweep away all these ills rose up ever new and ever higher,” Brunetti laments.

Ms. Leon, who has lived in Venice for three decades, has never shied away from criticizing her adopted country’s chaotic politics, obliquely lambasting in this new book the recently fallen Prime Minister Silvio Berlusconi and Italy’s tabloid fascination with his alleged sexual escapades as “Signore Bunga Bunga.”

But it’s Ms. Leon’s despairing view of this state of affairs that fuels her detective fiction with some aspect of these many derelictions lying at the root of her fictional crimes.

In Beastly Things, the victim turns out to have been a veterinarian employed by a slaughterhouse to ensure that livestock are dispatched humanely and in accordance with standards set by the European Union. Brunetti’s visit to the abattoir convinces him of the elastic interpretations of “humane”, adding an animal rights theme to Ms. Leon’s plot; while Brunetti’s inquiries demonstrate that the EU’s oversight may be clearer in theory than in practice.

Ms. Leon herself may be as aware as her fictional hero of the passage of time. Producing a Brunetti book every year for the last 20 years, Ms. Leon seems to be taking more shortcuts in her plotting in favor of more acute social commentary, as if she is rushing to hit as many targets as possible before it’s too late. She relies more heavily in Beastly Things, for example, on the mysterious computer skills of Signorina Elettra, the secretary of Brunetti’s nemesis Vice-Questore Giuseppe Patta, to get major plot points across.

Throughout the book, Brunetti relies on Signorina Elettra’s remarkable ability to find out anything about anyone via computer to uncover important clues to the mystery, whereas in earlier books Brunetti would have come up with the information the old-fashioned way, on foot.

It was those more pedestrian endeavors that revealed the beauty and danger of Brunetti’s Venice, a Venice that Ms. Leon now seems too exasperated to continue showing us. “Lip service was still being paid, but all that remained was a well-remembered ghost,” Ms. Leon writes in one of Brunetti’s ruminations about the Venetian cultural and social decline.

One hopes Ms. Leon can keep that ghost from evaporating entirely.