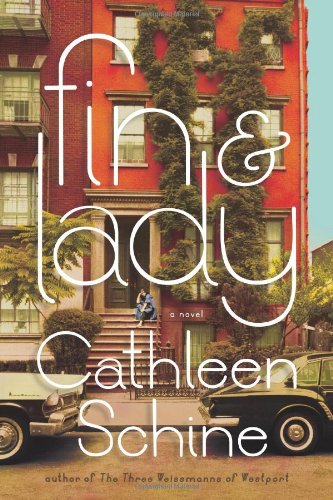 Cathleen Schine’s ninth novel begins with a death and a funeral and ends on a similarly mournful note, but in between, Fin & Lady spins a witty and touching coming-of-age story set against the social and political upheavals of the 1960s, an era now far enough removed from us to have migrated from social history to literary terrain.

Ms. Schine certainly knows the territory into which she inserts 11-year-old Fin Hadley, whom we first meet in 1964 at his mother’s funeral in upstate New York, left an orphan in the care of family friends.

But into this void sweeps Lady Hadley, his much older half-sister and a sort of Holly Golightly of the Greenwich Village set. Tall, leggy, knee-booted, and mini-skirted, Lady is now Fin’s only family and legal guardian.

“She was so vivid,” Fin thinks as she scoops Fin into her turquoise Karmann Ghia convertible and off to Manhattan. She is given to exclamations like “Lavender Jesus!” and “Criminy Dutch!”; hangs out with Greenwich Village writers and artists; and appreciates the pleasures of cigarettes, a stiff drink, and serial boyfriends.

While the setup might sound like Auntie Mame for the hippie set, Ms. Schine is concerned with more serious contemplations, as her consummate storytelling lets the ominously dark clouds that defined the period begin to gather—assassinations, bombings, mass protests—and reflect the more personal upheavals for Lady and Fin.

Like the literary ancestors she has acknowledged as her chief influences—Trollope, Austen, Dickens—Ms. Schine weaves a carefully structured story anchored in fully realized characters that spring to life after just a few sentences, even minor characters, as in the case of one of Lady’s girlfriends whose face, Ms. Schine writes, “was permanently puckered with worry. When she talked, and she talked a lot, she seemed to be squeezing her words up from somewhere, somewhere you probably wouldn’t want to go. Ever.”

And Ms. Schine’s breezy prose style belies her careful attention to detail and balance. Lady and Fin, who share a common father—the blustering, impecunious and long-deceased Hugo—have different mothers who in their different ways have gifted their children with the means for an independence.

Fin inherits his mother’s family dairy farm and its valuable real estate; Lady, her mother’s wealth and social skills. And as the slaughter intensifies in Vietnam; as first Martin Luther King and then Robert Kennedy fall to assassin’s bullets; and as Lady’s suitors either evade the draft by fleeing or accept their numbered fate, so does Lady’s joie de vivre slip away and Fin’s transition to young adulthood tortuously unfold.

Threatening to upset that balance, however, is Ms. Schine’s only misstep: the gradual introduction of a mysterious, first-person narrator whose identity she withholds until the book’s final pages.

Like an unwanted newcomer at an otherwise intimate conversation, the technique intrudes between the reader and the story, in contrast to the easy familiarity of Ms. Schine’s previous two novels, The Three Weissmans of Westport and the sublime The New Yorkers.

The revelation of this ghostly narrator’s identity doesn’t add much to the story’s conclusion, blurring our friendship with Fin and removing us even further from Lady, the whirling, consuming center of Ms. Schine’s story. “Rushing was the substance of her activity rather than what happened in between,” the narrator passes on to us from Fin as he reflects on Lady, “that she never really went anywhere.” Even so, we wish we’d been allowed closer.

Cathleen Schine's witty, wry prose is well served by the actress Anne Twomey, who deftly brings to life Ms. Schine's warmly affecting story of two souls searching for an identity in New York's Greenwich Village in the 1960s. Against the backdrop of the era's social unrest and the ominous drumbeat of the Vietnam War, 11-year-old Fin Hadley is adopted at the death of his mother by his half-sister, Lady. Ms. Twomey's reading captures Fin's adolescent struggles and Lady's growing doubts about the bohemian world to which she's introduced Fin, about to be transformed by the intrusion of the real world.