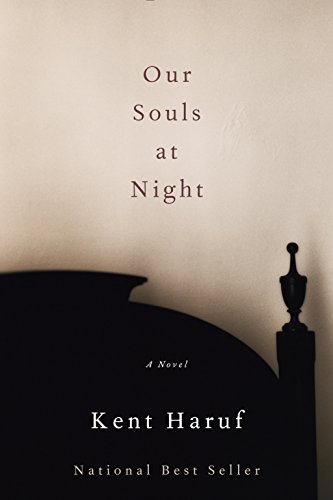 “Fans of Mr. Haruf’s earlier novels . . . will find much to treasure in his trademark spare prose.”

Kent Haruf’s posthumous novella begins in the same way his previous stories of life in fictional Holt, Colorado begin: abruptly, intimately, as if we’d suddenly walked into the middle of a story.

“And then there was the day when Addie Moore made a call on Louis Waters,” Haruf offers as his opening sentence. The rest of this slim book charts the relationship between these two elderly Holt residents as Haruf—who died in 2014, at 71, shortly after finishing Our Souls at Night—meditates on the loneliness and regrets of later years.

Addie and Louis are both widowers, casually if not intimately acquainted during their married years, but it’s Addie who seems most affected by her loss and who comes to Louis with a proposal. “I wonder if you would consider coming to my house sometimes to sleep with me,” Addie asks Louis, adding she means it literally and not sexually. What subsequently unfolds is part love story, part family melodrama (both Louis and Addie have children, each of whom reacts differently to their relationship).

Fans of Haruf’s earlier novels, especially the National Book Award finalist Plainsong (1999), will find much to treasure in his trademark spare prose, which eschews even quotation marks, a sign of Haruf’s acknowledged stylistic debt to Hemingway. And like Faulkner, another of his cited influences, his familiarity with the town of Holt, which he developed in the course of five novels, grounds his writing as firmly in place as Faulkner’s tales of Yoknapatawpha County. “I feel as if I know all the people there, and all the dogs and that stuff,” Haruf told an interviewer just as he was beginning work on Our Souls at Night. “I’m the sole proprietor of that town.”

But that familiarity may not have served Haruf in this book as well as it did in his previous and much respected novels. His story of Louis and Addie’s relationship seems a bit perfunctory, as if we’re paying just a brief flying visit to Holt instead of becoming immersed in it, as Mr. Haruf so admirably accomplished in those previous books.

Louis and Addie (and especially Addie) seem only partially developed as characters, lacking the compassionate depth of Haruf’s earlier Holt dwellers, like Plainsong’s Tom Guthrie and the memorable McPheron brothers. While those characters, and their pasts and futures, were carefully constructed and related, in this new book Louis and Addie’s stories are merely laid out in long sections of explanatory dialogue between the two of them.

Most fully developed is the relationship between Louis and Addie’s grandson Jamie; least developed is Addie’s son Gene, a cardboard foil to the growing bond between his mother and Louis. Haruf even indulges in a bit of self-referential metafiction when Addie and Louis travel to Denver to see a play based on Haruf’s 2013 novel Benediction, which was in fact mounted at the Denver Center Theater shortly after Mr. Haruf’s death. “He could write a book about us,” Addie speculates after they see the play. “I don’t want to be in any book,” Louis grumbles.

So perhaps it’s appropriate that Louis seems such a reluctant, taciturn character in Our Souls at Night, and that Haruf’s last visit to Holt is such a brief and melancholic one.

The book was written while he suffered from the debilitating lung disease that proved fatal. “I just want to live simply and pay attention to what’s happening each day,” Louis tells Addie. And that is precisely what Haruf has accomplished in this last work.