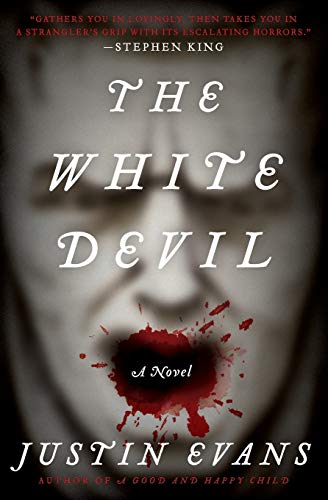 Ghosts have been getting awfully pushy lately. Gone are the days of spectral figures roaming the corridors of dank castles, rattling chains and the sensibilities of genteel young ladies. Perhaps feeling left out by our modern day penchant for nightmare monsters and gory horror, ghosts nowadays are asserting their rights to actively interfere in human affairs instead of just giving us, in Edith Wharton’s words, “the fun of the shudder.” They’ve invaded our dreams, infested our computers, invaded suburbia, and now, in Justin Evans’ The White Devil, even try to have sex with us.

Mr. Evans, whose debut novel in 2007, A Good and Happy Child, announced the arrival of a new talent in the challenging genre of the psychological thriller, has now taken on in The White Devil the even narrower strictures of the traditional ghost story, obediently providing the required setting in the hoary halls of Harrow, the British public school for boys where Mr. Evans himself spent a year on an American scholarship in his younger days.

Also present are a hidden room deep in the bowels of the school, boarded up for centuries; half-credible rumors among the school’s youthful population of a ghost; a tin box of weathered parchment letters secreted in the aforementioned hidden room; and a brooding, depressive atmosphere that weighs on even the sunniest dispositions among the student body. “This place took my laughter away from me,” one of them confides.

Mr. Evans adds to this time-honored mix, not the traditional besieged heroine of the good old ghost story days, but a sulky young American, Andrew Taylor, dispatched to Harrow by his status-conscious father after expulsion from boarding schools back home for bad behavior involving drugs, among other failings.

Andrew senses Harrow’s foreboding air even before he steps through the gates. “What happened when the girls, the sunshine, and the warmth were on the outside and you were on the inside, chilly, English and isolated?” Andrew wonders. “It would be like passing a year in a meat locker.” The metaphor proves apt, as Andrew begins to dream of a thin, white-haired boy with sunken eyes, a libido that seems anything but dead, and a ghastly cough; witnesses a murder (or thinks he does) by apparent supernatural means; runs afoul of the school’s hidebound rules; and falls in love with the ominously named Persephone Vine, who bears the first name of the Greek goddess of the underworld.

Mr. Evans binds all this together with a literary conceit that saves The White Devil from a mere Gothic potboiler, built on the historical facts that Lord Byron was a Harrow boy in the early 19th century, of his priapic adventures with both sexes, and his sudden and still unexplained exodus from England to wash up in Greece, where he died. But the addition of this Byron motif threatens to restore the disbelief that we’ve so willingly suspended during the initial chapters, for it requires a generous dose of coincidence.

Andrew bears an uncanny resemblance to Byron and, even more coincidentally, arrives at Harrow just as a play about Byron written by a faculty member is about to begin rehearsals. Wouldn’t you know the play’s cast still lacks a convincing Byron and its author welcomes Andrew with open arms.

Mr. Evans labors mightily from here on to keep the ghost half-hidden as he undertakes the task facing every writer who creates a ghost: explaining it. A master of the breakneck narrative and the end-of-each-chapter clincher, of the dream-that-may-not-be-a-dream but that provides a lot of the background information we need, and a literary tone that lifts the book above its fellow ghost-infested siblings, Mr. Evans has come up with a classic page-turner and some wonderfully accomplished descriptive passages. “He stank of urine, like a homeless man, and the kind of savory, fleshy rot, like the sidewalk outside a meatpacker’s,” Mr. Evans writes of one particularly disturbing visit from the ghost that seeks out Andrew. Even worse, this ghost not only attempts sexual congress but has further abilities intruding into the real world involving vomited blood and a dread disease.

Mr. Evans keeps it all moving along like clockwork, so that we barely wonder at the presence of one girl student at an all-boys’ school, even if she is the daughter of one of the faculty, or that a headmaster would subject his student body to an assembly at which the featured speaker is a coroner eager to describe the murder victim’s cause of death, or that no one thinks it odd that another faculty member takes a sledge hammer to the school’s ancient walls without asking anyone beforehand to uncover the secret chamber.

It’s all in the service of a good, rollicking and creepy tale of a ghost who, like the characters in John Webster’s Jacobean tragedy from which the book takes its title, is bent on exacting revenge.

“I’m trying to save you, Andrew, before it’s too late,” one of Andrew’s fellow Sixth Formers tells him early on in the story, “I’m trying to show you how to be normal.” Lucky for us, Andrew doesn’t listen.