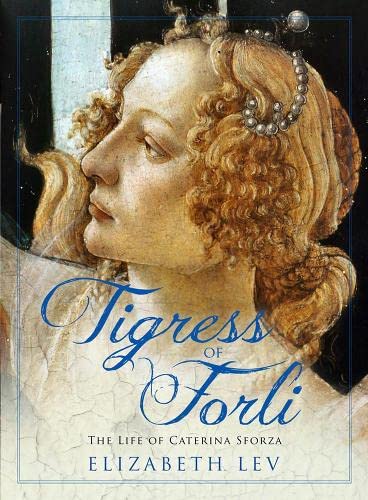 “Ms. Lev lives in Rome; The Tigress of Forlì, her first book, tells Caterina’s story in clear, flowing prose, drawing on contemporary sources preserved in state and municipal archives, much of which has never before been translated into English.”

Few historical eras encapsulate our contradictory impulses toward creation and destruction as does the Renaissance.

It was a time when some of our most treasured works of art and literature were created while savage wars, brutal torture, and gruesome deaths were routine aspects of daily life.

Art historian Elizabeth Lev sets out to explore this dichotomy in the person of Caterina Riario Sforza De Medici, who was the Renaissance version of a media celebrity for her serial liaisons with some of the most powerful and dangerous men of the day, for her political meddling and vicious reprisals against her enemies, and for her religious piety—a combination that to the Renaissance mind seemed entirely normal.

Ms. Lev lives in Rome; The Tigress of Forlì, her first book, tells Caterina’s story in clear, flowing prose, drawing on contemporary sources preserved in state and municipal archives, much of which has never before been translated into English. Her tidy style makes Renaissance Italy’s swirling vortex of alliances, grudges, and revenge comprehensible to even the casual student of the period.

Born in 1463 as the illegitimate daughter of Milan’s Duke Galeazzo Maria Sforza, northern Italy’s most politically astute and powerful family of the time, Caterina was raised in tapestried luxury alongside the Duke’s legitimate offspring, but found herself married at the age of eleven to the feckless Girolamo Riario, the Count of Forlì, in northeastern Italy, whom Galeazzo’s wife had refused as a match for one of the couple’s own daughters.

Although 14 was considered the proper age for a young betrothed woman to submit to her fiance’s sexual advances, Ms. Lev implies that Caterina lost her virginity to Riario well before then, when she was barely eleven years old, certainly a crucial, not to say traumatic, experience that shaped Caterina’s later career. But Ms. Lev makes little of it. “Caterina got over her psychological and physical wounds quickly,” is all Ms. Lev has to say on the subject, offering no direct evidence for the speculation.

The Sforzas promoted the match because Riario was a nephew of Pope Sixtus IV, cementing a relationship with the Vatican that would prove dangerous to Caterina on Sixtus’ death in 1483, after Riario had dabbled in assassination plots and internecine warfare with the rival Colonna family, favorites of the new pope, Innocent VIII.

Caterina’s most memorable moment came when, seven months’ pregnant with her fourth child, she galloped to the Castel Sant’ Angelo and held the papal fortress for 11 days to protect her in-laws’ rights while negotiating with the cardinals about to elevate Innocent to the throne. She had, as one contemporary wrote, an “iron constitution under velvet wrappings,” unlike her husband, who had gone into hiding on Sixtus’ death.

In the following years, her relations with the Vatican deteriorated to the point at which Alexander VI, Innocent’s successor, made her the first woman to be labeled iniquitatis filia, a “daughter of iniquity,” an epithet applied until then only to those of the male sex who had invited papal displeasure.

Alexander had become irritated with Caterina for her astute maneuvering blocking his plans to acquire Forlì and its income for the papal treasury, an income Caterina had inherited, along with Forlì and its sister town, Imola, after Riario had been assassinated by a rival family. Retaking the town with the support of loyal courtiers, Caterina’s revenge was swift and bloody and not the last time she would exact severed heads and mutilated bodies from her enemies. “She had no fear of danger,” a French observer wrote of her. “No matter how close it approached, she never backed down.”

By 1498, when she was 36 and had buried four husbands, Caterina had become a full-fledged participant in the endless conflicts between Milan, Florence, Siena, Venice, and the Vatican and was famous throughout northern Italy for her bravery and ruthlessness. But she met her match in Cesare Borgia, Alexander VI’s son, who laid siege to Caterina’s fortress of Ravaldino to win Forlì for his father’s benefit. Caterina spent 18 months imprisoned in the same Castel Sant’ Angelo she had held against the might of the Vatican 15 years earlier.

At her death in Florence in 1509, she had sired seven children, six of them boys and all of them surviving into adulthood, rare for the time. (The youngest of them would grow up to be known as the famous condottiere Giovanni della Bande Nere.)

Caterina had maintained her hold on Forlì and Imola for nearly two decades, surviving sieges by rivals and sporadically rebellious townspeople, her beauty and fame such that Botticelli painted her as one of the Three Graces in his Primavera for the Sistine Chapel. “If I were to write the story of my life,” she is said to have confided to a monk in her last years, “I would shock the world.” Five hundred years later, Ms. Lev has taken up that task, providing a rich portrait that does Caterina’s boast justice.