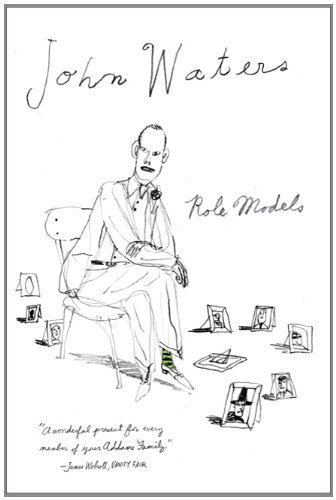 The filmmaker and trash culture maven John Waters still has in his possession a junior-high-school yearbook in which one of his teachers wrote: “To someone who can, but doesn’t.” Recently arrived at the ripe old age of 64, Mr. Waters certainly could, thank you very much, and has.

Starting with his first eight-millimeter film, 1964’s Hag In a Black Leather Jacket, he ventured deep into the lower regions of American life and reported his findings with the wonder and delight of a schoolboy reading naughty magazines in the bathroom. Mondo Trasho (1969), Multiple Maniacs (1970), and the cult classic Pink Flamingos (1972)—all starring his childhood friend and muse Glenn Milstead, who performed as Divine, carved out his reputation as a connoisseur of the louche, the exploitative, the repugnant. With age, though, came compassion and a social conscience displayed in his later and more mainstream pictures, notably the plea for tolerance and diversity encapsulated in Hairspray (1988), which spawned a Broadway musical and convinced John Travolta to dance in drag with Christopher Walken in the musical’s film version as the indomitable Edna Turnblad.

Through it all, Mr. Waters has been a keen observer on the page as well as on the screen, and he has collected ten of his essays in Role Models, some of which previously appeared in Playboy and on The Huffington Post. This is Mr. Waters’ fourth book of cultural and political musings, which here range from a tour of the gay-or-whatever bar life of his beloved Baltimore to visits with such diverse idols as Johnny Mathis; Little Richard; and Patty McCormack, the child star of The Bad Seed, now a genteel 68 and who most recently played Pat Nixon opposite Frank Langella in Frost/Nixon. To Mr. Waters’ amazement, Ms. McCormack reveals that she once took a college-level ethics class with convicted Manson Family murderess Susan Atkins.

The Manson horror has long fascinated Mr. Waters, who has developed a personal relationship with another member of the group, most of whom remain imprisoned. “I have a really good friend who was convicted of killing two innocent people when she was 19 years old on a horrible night of 1969 cult madness,” Mr. Waters begins. “Her name is Leslie Van Houten and I think you would like her as much as I do.” This essay, the longest and most thought-provoking in the book, is the opening salvo in Mr. Waters’ attempt (joining with many others) to convince the California prison system to parole Ms. Van Houten, who is now 60 and who has been denied parole numerous times in the last two decades, despite her record as a model prisoner and her repeated and anguished expressions of regret for her part in the murders.

Mr. Waters is a polished and entertaining writer with a neat, buttoned-down style that belies his more outré excursions through pop culture. We meet the foul-mouthed matron of Mr. Waters’ favorite Baltimore watering hole, a lesbian stripper named Zorro, and a former pornographic filmmaker reduced to living in a decrepit shack with two pigs. Mr. Waters examines them all with the detached attention of a laboratory scientist presented with an especially interesting specimen, with barely a twitch of his famous, pencil-thin mustache—which, it is revealed, is helped by the application of Velvet Black Maybelline Expert Eyes.

Mr. Waters returns to youthful form in the book’s last essay, in which he places tongue firmly in cheek to lay out the rules for becoming a member of his official John Waters Cult Club, noting that William Burroughs once called him “the Pope of Trash.” His blessings may be scatalogical, embarrassing, or downright gross, but they bestow a kind of grace on us for being such complex, diverse, and entertaining beings.