To a Mountain in Tibet 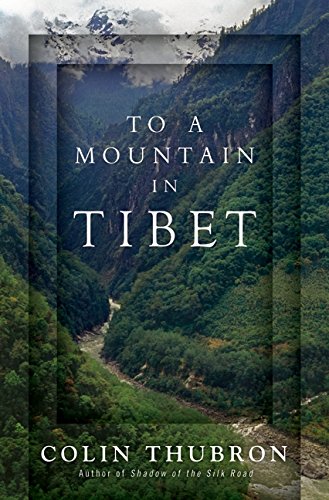 Even the longest journey, the saying goes, begins with the smallest step. The British travel writer and novelist Colin Thubron has taken some very long journeys, indeed, most famously his 7,000-mile-long trek from China to the Mediterranean related in 2007’s Shadow of the Silk Road. But “Sometimes journeys begin long before their first step is taken,” he writes early on in To a Mountain in Tibet. “Mine, without knowing it, starts not long ago, in a hospital ward, as the last of my family dies.”

His mother’s death, long after that of his father and some years after that of his younger sister in a skiing accident, was the real beginning of his eventual trek through western Nepal and into Tibet, on pilgrimage to Kailas, the 22,000-foot high mountain sacred to Hindus, Buddhists, and the indigenous beliefs of Tibetans collected under the term Bon.

Mr. Thubron has long been fascinated by eastern esoteric beliefs and shares what he’s learned as he crosses the difficult border between Nepal and Tibet, closely watched by suspicious Chinese authorities, and begins the arduous climb to the plateau on which Kailas sits, in the southwestern part of the country.

Hindus regard Kailas as the abode of Shiva, the god of destruction and rebirth, who meditates in a temple at the mountain’s summit. Buddhists regard the mountain as an important site on the journey of Padmasambhava, an avatar of the Buddha who brought the master’s teachings to Tibet.

The mountain, Mr. Thubron makes plain, is almost alive with the gods, demons and beasts of Tibetan myth. To travel there and walk the 32-mile-long path that circles the mountain’s lower regions is to be cleansed of one’s past sins, prepared to meet the assured death of the body and continued journey of the spirit. No one has ever climbed to the peak, for it’s forbidden to do so.

Mr. Thubron has written 15 previous books of travel journalism (and seven novels as well) and by now has developed his formidable descriptive talents into a form that is elegantly literary and deeply thoughtful. As his progress along the pilgrimage path brings Kailas’ formidable north face into view, Mr. Thubron is struck by its similarity to the Swiss mountain where his sister was killed in an avalanche. “I am shivering as if my padded anorak and thermal layers are muslin,” he writes. “Buddhists discern on the north scarp of Kailas a devil leading a pig, and the palace of a serpent king. But I have stopped looking.”

Mr. Thubron is also known for traveling to, and through, places in transition, sometimes violently so. He was in Lebanon not long before religious strife wrecked the country 30 years ago; in Cyprus soon after, when tensions between Greek and Turkish parts of the island were simmering; and in former states of the Soviet Union experiencing the first throes of independence after decades of rule from Moscow.

And so the Chinese suppression of Tibet’s native populace during the Cultural Revolution does not go unnoticed in To a Mountain in Tibet, particularly the destruction of ancient centers of Buddhist belief. ”By 1976,” Mr. Thubron tells us, “out of more than 6,000 monasteries and temples, thirteen remained.” Only recently have some of them been allowed to rebuild, mere shadows now of their former importance, haunted by monks too old to travel elsewhere.

When Mr. Thubron straggles down from the highest point of his clockwise circuit of Kailas, gasping for breath in the thin air, he is an honest enough writer not to manufacture some closure in his emotional struggles with the void left by his family’s absence. He admits to only a sense of melancholy.

“The sheerness of never,” he writes, “is beyond us.”