A Lady Cyclist’s Guide to Kashgar 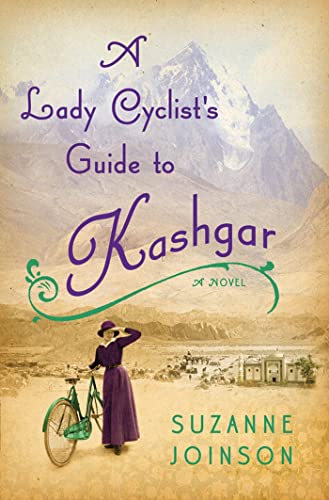 “Ms. Joinson layers her basic narrative with references to religious hypocrisy, cultural ignorance and sexual gamesmanship, throwing in for good measure Arabic ornithological mythology, bicycling tips for the novice female rider, and the dangers of cult worship. . . . Ms. Joinson succeeds in keeping us moving and takes us to places very far away before we reach the end of this immensely satisfying story.”

Some years ago, while rooting through the offerings at an outdoor flea market, the British writer Suzanne Joinson came across a box of letters from the early 20th century written by lady missionaries to friends back home.

Curious about the unconventional lives these women pursued in places far removed from the cozy and familiar, Ms. Joinson’s research eventually produced A Lady Cyclist’s Guide to Kashgar, a richly detailed and sensuous exploration of self-discovery, subversion, and sexual politics.

That’s a lot to tackle for any novelist, let alone a first-timer, and Ms. Joinson adds to the challenge by constructing this ambitious debut novel in two time periods with two different heroines, both of whom are self-acknowledged frauds. One is Evangeline English, who travels in 1923 with her emotionally delicate sister Lizzie and their domineering missionary leader Millicent to remote northwestern China to convert the mostly Muslim population. Eva has exploited Millicent’s missionary zeal to flee the stifling domesticity of England, confiding her subterfuge only to the diary she keeps hidden from the others and which she hopes to use as the basis for a book of her travels.

Parallel to Evangeline’s story is the contemporary London setting of Frieda Blakeman, who learns that she has been named as the sole heir of a deceased woman of whom she’s never heard. Frieda has been stuck in a dishonest relationship with a dipsomaniac married man who thinks she loves him, a conceit which the introverted Frieda allows to continue.

Ms. Joinson delicately inserts into this double-tracked narrative hints that Eva and Frieda are somehow connected, leaving us helplessly, if eagerly, turning the page to unlock the secret.

Ms. Joinson, who developed this novel from a short story that won Britain’s New Writing Ventures award, possesses formidable descriptive talents, especially evident as she describes Eva’s travels along the ancient Silk Route of far western China. Her familiarity with the terrain is plain in these passages as Eva and her companions venture deep into what is now China’s Xinjiang Province and walk straight into seething political unrest between the native population and their Chinese overlords (unrest which continues today as native Uighurs challenge Chinese hegemony).

Frieda’s sections of the book are less descriptively dazzling, but Ms. Joinson makes up for it by introducing an illegal Yemeni immigrant whom Frieda finds sleeping outside her front door. Tayeb, because of his illegal status, is also somewhat of a fraud, at least in the eyes of the British government, but his developing relationship with Frieda provides a satisfying counterweight to Eva’s more exotic surroundings.

But this is just scratching the surface of this complex work. Ms. Joinson layers her basic narrative with references to religious hypocrisy, cultural ignorance and sexual gamesmanship, throwing in for good measure Arabic ornithological mythology, bicycling tips for the novice female rider, and the dangers of cult worship, all of which disparate elements are directly related to the main story.

While the reader sometimes feels overwhelmed by this extravagance, not to mention a cast of sharply drawn secondary characters, Ms. Joinson keeps her main storylines clear and the momentum of the work consistent.

The cycling metaphor works particularly well in tying together Eva’s and Frieda’s progress toward self-discovery. Eva’s most prized possession on her travels is her bicycle: the means of transport by which she hopes to attract readers to her planned book. Those two wheels are an escape, too, for Frieda. “Cycle, wheels fast, move fast, keep moving, go go go until you are far away,” Frieda says of her childhood passion.

Ms. Joinson succeeds in keeping us moving and takes us to places very far away before we reach the end of this immensely satisfying story.