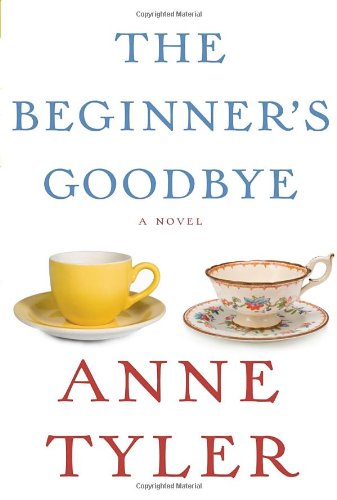 “Ms. Tyler’s plainspoken prose, rich character development and keen eye for the essential goodness of human beings continue to serve her, and us, well. Even the sound of a doorbell . . . doesn’t escape her notice.”

Loss and grief have always been the undercurrents of Anne Tyler’s fiction, swirling away beneath her deceptively straightforward prose and wry humor. Whether caused by divorce, death, or deliberate abandonment, the emotions portrayed in Ms. Tyler’s 18 novels show us the adaptive and inventive ways we manage to cope.

Now in her 19th novel, Ms. Tyler pulls these twin themes to the surface and crafts a delicate and touching exploration through the eyes of her narrator, Aaron Woolcott, who tells us straight out in the first line of The Beginner’s Goodbye that “The strangest thing about my wife’s return from the dead was how other people reacted.”

Ms. Tyler leaves it up to the reader to decide if Dorothy, the deceased spouse in question, has actually returned but leaves no doubt that Aaron thinks so. And as Ms. Tyler is wont to do when writing of her characters’ monumental life changes, the circumstances and method by which Dorothy has been dispatched are slightly off-kilter, involving an argument with Aaron over Triscuits after which a tree falls on the sun porch of the couple’s home, where Dorothy has retreated in a huff, crushing her to death.

Nor does Ms. Tyler give us an especially sympathetic portrait of the poor woman, even if it’s her widowed husband who’s describing her to us. “Dorothy was a bit like a panda bear,” Aaron tells us. “She had that same roundness and compactness.” Her fingers are “raspy, and golden brown and chubby,” Aaron says, and her wardrobe consists of thin, black slacks ragged at the hem and the white doctor’s coat she wears in her job as a radiologist. She smells, we learn, of Ivory soap and isopropyl alcohol.

But more to Ms. Tyler's narrative purpose, she and Aaron seem badly mismatched temperamentally during their married life, venting their frustrations with each other by arguing about mundane subjects like Triscuits.

Aaron himself is slightly off-kilter, too, so out of touch with his grief that he can’t understand why everyone else seems to be ignoring the apparently resuscitated Dorothy. It’s a narrative conceit that allows Ms. Tyler to explore the vivid post-mortem memories of loved ones that we create, and the inevitable conviction that we never got a chance to say everything to them that we could have before they disappeared from our lives.

Aaron’s inability to confront his own feelings forces him to project them onto Dorothy who, he decides, is the one who “faced the fact that we simply missed each other too much. She had given in and returned. That’s what I liked to believe.”

As Aaron moves out of his ruined home to live with his sister, returns to work at the family-owned vanity press for which he serves as chief editor and attempts to grow accustomed to life with a ghostly yet reproving wife, Ms. Tyler’s surrounding cast of characters keep drawing him back to normal details of daily life.

Nandina, his sister, ends up marrying the contractor who rebuilds Aaron’s house; Aaron struggles against his long-standing attraction to the glamorous Irene, a fellow editor; and tries to resist the blandishments of the practical-minded Peggy, the firm’s long-standing secretary and the only one to realize the depth of Aaron’s grief and his imprisonment by it.

“We’re all just doing our best here,” Peggy finally explodes in exasperation. “We’re just trying to get through life as best we can, like everybody else!”

Ms. Tyler’s humor turns impish when it comes to the vanity press business, which even Aaron regards with a jaundiced eye, particularly the press’ “Beginner’s . . .” series, written by amateur authors on everything from home remodeling to planning a wedding. “Those books aren’t meant to be used,” Aaron says of the series, the hackneyed prose of which he spends his days trying to wrestle into readable form. “They’re more like . . . gestures. Things you give to other people.” But it’s a kind of meta-fictional device for Ms. Tyler who, in effect, is adding to the series, both with her story and with its title.

There are a few quibbles however reluctantly noted given Ms. Tyler’s long and distinguished career that includes a Pulitzer Prize for her 1988 novel Breathing Lessons. Although Aaron’s voice on the page—subdued in tone and even a bit fussy in its politeness—reads as if he were an older man, it comes as almost a shock to learn he’s only in his forties as he relates his story, and was only 36 when Dorothy, eight years his senior, died.

And as Ms. Tyler threads the reconstruction of Aaron’s house through her narrative, the metaphor grows increasingly shopworn, as does her choice to give Aaron physical scars in the form of a limp and a stutter, all of which brings an unnecessary burden to this gently told story.

But Ms. Tyler’s plainspoken prose, rich character development, and keen eye for the essential goodness of human beings continue to serve her, and us, well. Even the sound of a doorbell (“Kind of churchy, kind of self-important”) doesn’t escape her notice, and her compassion for struggling characters like Aaron remains as strong as ever. “Sometimes,” Aaron says, “I think I am unluckier than other people but much, much happier.” For all of us beginners, that’s a good start.