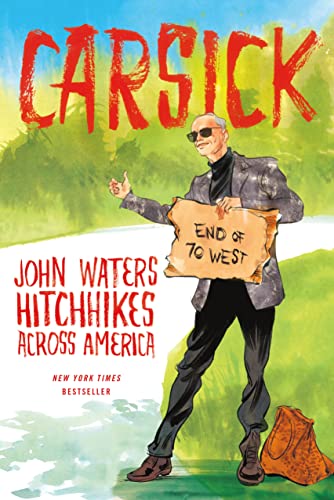 “Mr. Waters impishly provides us with not only a day-by-day description of his actual hitchhike, but two novellas.”

It’s remarkable that it’s taken this long for John Waters, now well into his sixties, to write a book about hitchhiking across America. Waters, after all, has spent the better part of his professional life as the Pope of Trash exploring the underbelly of American culture in such trash cult classics as Pink Flamingos and Female Trouble, still infamous if fictional (thank goodness) explorations of seriously perverse behavior.

But in the spring of 2012, Waters decided to write his seventh book by experiencing first-hand the facts of America’s subcultures by hitchhiking from his native Baltimore all the way to San Francisco. An admitted control freak, Waters wonders in the introduction to Carsick if he’s up to the uncertainties of life on the road and what he intends to prove.

“I’m not bored,” he writes. “My career dreams already came true years ago and what I do now is all gravy. Shouldn’t I be retiring instead of sticking out my thumb?” Nonetheless, he hits the road armed with cardboard signs (one of which says “I’M NOT PSYCHO”) and, to soothe his control freak genes, a tracking device so his office staff back in Baltimore always knows where he is.

Carsick isn’t a straightforward On the Road clone, however. Waters impishly provides us with not only a day-by-day description of his actual hitchhike, but two novellas: “The Best That Could Happen” and “The Worst That Could Happen,” each classics of the Waters oeuvre and both written before he actually hit the road. In each case, Waters gives full rein to his trash roots with fictional creations that rival anything he’s ever put on screen.

In “The Best That Could Happen” Waters imagines a cross-country trip full of his favorite kinds of eccentrics, freaks, and amiable perverts, many of whom joyfully recognize him as their hero. There’s an escaped convict named Ready Whip and his girlfriend Polk-A-Dotty; there’s a prostitute named Fumbelina, and a trucker named Gumdrop. There’s a drug-and-alcohol-fueled rave in a junkyard, a bank robbery, and a tawdry traveling carnival at which Waters ends up as the target in a knife-throwing exhibition, to his great excitement and delight.

Events turn more creepy in “The Worst That Could Happen” populated by on-the-edge characters that only Waters could invent and that are not for the prudish or squeamish. There is a belligerent junkie, a militant vegan, and a large man named Blossom with an unusual sexual preference. Waters comes to a horrifically bad end in these pages at the hands of a fanatic anti-smut campaigner.

In contrast, the last section of the book entitled “The Real Thing” comes as a relief. Waters abandons the high-caliber prose of the previous two sections to describe in a much gentler but sharply observant voice a perfectly ordinary hitchhike, with all its waiting and uncertainty and drab motel rooms. In eight days, he makes it to San Francisco relatively unscathed and just one pound lighter. Everyone who picks him up is kind and considerate, including a policeman who offers him a ride along with safe hitchhiking tips.

Waters, in short, discovers Middle America, somewhere safely between his imaginary world of trash and the glitz of high culture. “My riders were brave and open-minded,” Waters writes, “and their down-to-earth kindness gave me new faith in how decent Americans can be.”