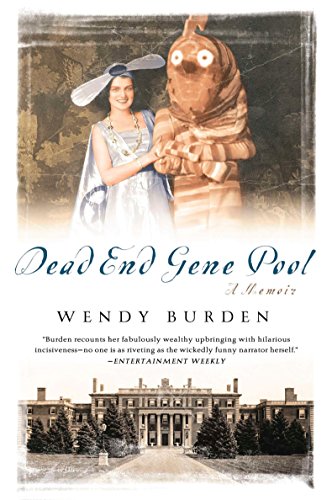 The rich may be different from you and me, but that doesn’t mean they are any more interesting. It’s eccentricities and bad habits that make a story; although if you put those together with great wealth, it helps. Wendy Burden points this out early on in her memoir Dead End Gene Pool by noting that “rich people behaving badly are far more interesting than the not so rich behaving badly;” and in her case, she draws on a personal history that involves people who were very rich, indeed.

Ms. Burden is the great-great-great-great granddaughter of Cornelius Vanderbilt, the nineteenth century railroad tycoon whose statue broods over his Grand Central Terminal, and whose libido spawned a vast, many-branched genealogy that includes not only Ms. Burden, but the CNN reporter Anderson Cooper; his mother, the fashion designer Gloria Vanderbilt; and the legendary New York politician and philanthropist Carter Burden, who was Ms. Burden’s cousin.

Ms. Burden, however, finds far more colorful Vanderbilts in her immediate family, including one uncle named Shirley, and another who was an ardent apologist for Hitler; an excessively flatulent grandmother nicknamed Gaga (aptly named, as was sadly proven in her later years); a grandfather who was far too busy running the family investment firm and being president of the Museum of Modern Art to pay much attention to the granddaughter, who seemed constantly underfoot in the family’s vast mansions and sprawling apartments; and a non-Vanderbilt mother who was blamed by the rest of the family for her Vanderbilt husband’s suicide and who spent much of Ms. Burden’s childhood in absentia with a series of playboy lovers and two more husbands. Of the latter, the first was an arms dealer who kept a supply of Uzis, Glocks, and Kalashnikovs stored in a cupboard under the stairs, while the second turned out to be a CIA operative.

While the bluntly-named Dead End Gene Pool rests on a bed of bitter memories, Ms. Burden works hard to keep her memoir’s tone wry rather than acerbic as she takes us on a tour of her childhood revenge fantasies perpetrated against her grandparents and various of their many servants. The grandparents, while virtually adopting her and two brothers after her mother’s disgrace, were too occupied with planning dinner parties, directing armies of maids, housekeepers, and gardeners, and stuffing their four opulent homes with modern art to pay much attention to her.

Her gender didn’t help. “Being a girl meant squat in my father’s family,” Ms. Burden notes. This was a family so distraught at the sudden death of Ms. Burden’s father, and so fixated on social proprieties, that it neglected to tell her how her father died and kept her away from the funeral. Ms. Burden claims she only discovered the fact of paternal suicide years later, by way of a newspaper clipping stuffed in a box of her father’s effects and hidden away in an attic.

But the figure that looms over these pages is Ms. Burden’s mother, Leslie Hamilton Burden, to whom Dead End Gene Pool is dedicated. Unlike Ms. Burden’s light-handed caricature of her grandparents that only deepens into poignancy near the end of the book, her treatment of her mother is more carefully and thoughtfully handled. Twice-married after William Burden’s death, depending on the largesse of various other jet-setting lovers to replace the material comforts taken away by the Burdens, sidestepping the tragic undercurrents of her children’s peripatetic lives, Leslie Burden emerges in these pages as a survivor fully engaged with the real world, unlike her ex-inlaws, who are flummoxed if the dessert fork is put in the wrong spot at their place setting.

Even when Ms. Burden shares with us, near the end of the book, a deposition given by her grandfather after her father’s death which paints a portrait of a wife careless of her husband’s depression, we still are left with an image of a woman whose chief failure was to leave her children to a life of physical comfort and emotional sterility.

Ms. Burden is a master of the barbed quip, but reading Dead End Gene Pool, her first book, is a little like sitting through a stand-up comedy routine that goes on too long with little shift in tone or rhythm. Thankfully there are brief flashes of real talent that keep us reading. Ms. Burden writes, for example, about a freshly caught fish dangling on the end of the fisherman’s line by telling us that “its white belly caught the light as it slowly spun, like a dead man on a rope.”

And when she puts the wisecracks aside to tell us at one point about the delights offered to a child of wealth in the New York of forty years ago, it’s like she’s taking a deep, nourishing breath, remembering a time “when it was all about going to FAO Schwarz and the zoo, and looking in the windows of Tiffany’s; and the smell of my grandmother’s Chanel No. 5, and the sun filtering through long Belgian linen curtains while we read books, while the sea of yellow Checker cabs honked pleasantly below.”

Just so. If we didn’t have those kinds of memories, life might indeed come to a dead end.