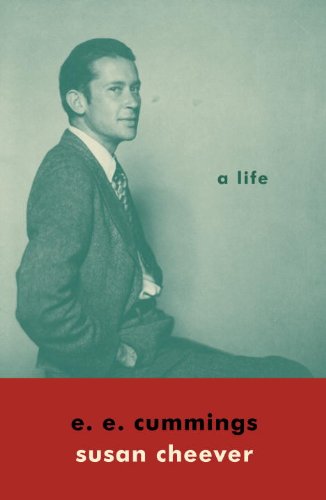 One cold winter night in 1960, Susan Cheever, then 17 years old, found herself in the back seat of her father John’s car as they drove toward Manhattan from her suburban Westchester County girls’ school.

In the passenger seat was E. E. Cummings, a favorite poet of her anti-authoritarian generation, who had just given a reading at Ms. Cheever’s school thanks to the friendship between Cummings and her father, now serving as the chauffeur bringing Cummings back to his apartment in Greenwich Village.

During that long ride to the city, Ms. Cheever delighted in Cummings’ amusingly acerbic comments on the faculty of her school and its slavish dedication to uniformity and respect for one’s betters. “Cummings was our generation’s beloved heretic,” Ms. Cheever writes in her affecting biography of the poet, “a Henry David Thoreau for the twentieth century.”

Ms. Cheever has chosen an opportune moment to bring Cummings back to our attention, for his mercurial reputation was never higher than during those times when Americans questioned their betters and sought to undermine established authority.

Cummings, who died in 1962, would have been delighted at the present antics of the Tea Party, at government shutdowns, the Occupy movement, and outrage at bureaucratic spying on private citizens.

But it wasn’t always so.

During the morally and socially smug middle of the last century, with America’s post-war prestige and power at its height, Cummings was relegated to the status of an oddball crank. Helen Vendler, who was just coming to prominence during those years as the country’s most important poetry critic, thought his poems were repellent.

“What is wrong with a man who writes this?” she wanted to know. But as Ms. Cheever makes clear, for Cummings and his fellow “New Art” peers of earlier in the century—Joyce, DuChamp, Stravinsky, Dos Passos, Pound, to name just a few—the job of any artist is to explore, to twist accepted forms into new shapes.

Cummings’ odd punctuation, jarring syntax, disrupted meter, and unusual arrangement of lines on the page were all his way of establishing a direct, visceral response in the reader.

One of his earliest poems to display the technique, inspired by the death in 1917 of Buffalo Bill Cody, a childhood hero, is also one of Cummings’ most famous:

It seemed almost inevitable that Edward Estlin Cummings would one day turn his back on his straitlaced, comfortably middle-class upbringing in Cambridge, Massachusetts, in a house just a short walk from Harvard.

Born in 1894 to a forward-thinking Congregationalist minister and a mother convinced of her son’s poetic gift, Cummings dutifully followed his father’s footsteps to Harvard and wrote traditionally structured nature poetry while getting a thorough education in every poetry form from the ancient Greeks on.

But like many young men unloosed from home to a college campus, Cummings began to rebel, delighting in Boston’s taverns and houses of dubious repute, although he remained a virgin into early manhood.

A friend introduced him to the unusual poetry of Ezra Pound, who would become a kind of dark mentor to Cummings, and Cummings’ own work soon took up the modernist credo. In no time at all, he’d fled Cambridge and established himself with the bohemian crowd of painters, sculptors, writers and rebels inhabiting Greenwich Village, a long-ago world Ms. Cheever brilliantly evokes; and by the time Cummings went off to fight in the First World War, he was questioning authority and establishment expectations to such an extent that he was incarcerated by his military superiors for refusing to acknowledge that he hated Germans.

The experience produced his first prose work, The Enormous Room, a kind of anti-memoir of the war. On his return, Ms. Cheever writes, “Cummings, the well-behaved boy, the shy, slight mama’s boy, the do-gooder and good-grade getter, became an angry young man.” It was this anger, she believes, that fed Cummings’ poetry, even at its most playful or obscure.

That anger was fed, too, by the overriding tragedy of Cummings’ life, the forced estrangement from his only child, Nancy, born of his affair with Elaine Thayer, the wife of one of Cummings’ early promoters and publishers, Scofield Thayer.

Thayer publicly claimed to be the infant’s father; later, when Thayer showed signs of mental instability and Elaine left him for an Irish politician, she legally cut Cummings off from his daughter, who was never told her real father’s identity. Ms. Cheever writes with great compassion in describing their reunion, more than 20 years later, and the delicate circling that led to Cummings’ announcement of his paternity.

Ms. Cheever is the kind of biographer who can maintain both an intimacy and a dispassionate relationship with her subject, as she demonstrated in her fine study of Louisa May Alcott and her group biography of the Concord Transcendentalists in her “American Bloomsbury.”

This present work on Cummings, the first to appear since Richard Kennedy’s 1980 “Dreams in the Mirror” to which Ms. Cheever acknowledges a great debt, makes a full circle around Cummings as she details his right-wing political views (he refused to attend a black-tie dinner with the Kennedys at the White House), his stern anti-Communism and support for Joseph McCarthy’s red baiting, and a latent anti-Semitism that at least once went far beyond the genteel racial prejudices of the time.

She includes an especially repugnant anti-Semitic poem that Cummings insisted, over the objections of friends and publishers, was included in his 1950 collection Xaipe, later claiming it had been intended as a parody of anti-Semitic ranting. Few were convinced.

But then there was the amusing 66-year-old man sitting next to her father on that drive to Cummings’ beloved Greenwich Village. When they arrived at Patchin Place, the discreet cul-de-sac off Sixth Avenue where Cummings lived for 40 years, her father declined Cummings’ offer of some coffee and further conversation, maybe a poem or two to discuss.

Cheever and his daughter had a long drive back to Westchester after all, but Ms. Cheever regretted the missed opportunity; and as she begins this deeply satisfying book, she writes, “I would like to take him up on that invitation.”