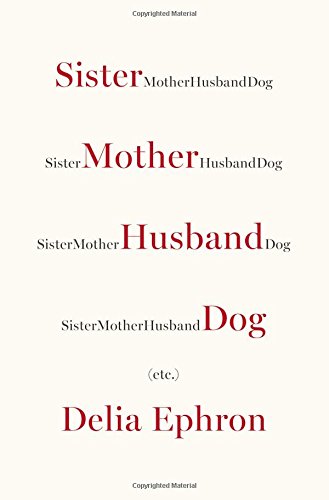 The spirits of two powerful women hover over the pages of Delia Ephron’s essay collection, embodied in the first two words of her book’s title.

The sister, of course, is Delia’s screenwriter/director older sibling Nora, with whom she frequently collaborated writing the scripts for Sleepless in Seattle, You’ve Got Mail, and Michael, among others, before Nora’s death from leukemia in June of 2012. That’s in addition to Ms. Ephron’s own three novels, the most recent of which, The Lion Is In was published to some acclaim last year.

“Is there nothing sisters don’t know about each other, nothing they don’t compare?” Ms. Ephron muses in the book’s first and most affecting essay, “Losing Nora.”

As the second born of four sisters (the younger two, Amy and Hallie, are also published authors), Ms. Ephron’s portrait of the older sister she loved, admired, and emulated is the kind of writing we’d all like to be able to set down on paper as a way of dealing with the awful absence death leaves in its wake.

While much of “Losing Nora” is in the form of the self-analytical questions and lingering guilt that fill that absence, Ms. Ephron doesn’t shy away from the little slights Nora sometimes bestowed—the hat she bought for Nora’s chemotherapy ravaged hair, dismissively rejected by Nora, who then effused over the exact same hat brought by a friend; Nora’s neglect in crediting famous lines from their screenplays that were Delia’s inspiration, and so on.

“With sisters is the competitive always marching side by side with the devotion?” Ms. Ephron wonders. “Does it get to be pure love when one of them is dying or is there always the beast hidden somewhere?”

But what Ms. Ephron most remembers is the dozen peach roses Nora sent her (“The sister in the hospital sending flowers to the one who was not,” Ms. Ephron notes), emblematic of the deep affection between them.

The second governing spirit of of the book—Ms. Ephron’s mother Phoebe, who died of alcoholism-related illness in 1971—is less benign and more perplexing, as indicated in the title of Ms. Ephron’s essay about her, “Why I Can’t Write About My Mother.”

Half of a screenwriting team with her husband Henry, the couple was responsible in their mid-20th century heyday for the scripts for the Hepburn/Tracey picture The Desk Set and for the Fred Astaire/Leslie Caron vehicle Daddy Long Legs. But Phoebe and Henry’s talent for glossy romantic comedy became obsolete with the death of the Hollywood studio system and the rise of punchier, bleaker independent filmmaking.

By the time Ms. Ephron was 11, her parents kept their star-studded memories alive with elegant parties and soothed their wounded professional pride with late night, cocktail-fueled fighting.

“They were George and Martha in ‘Who’s Afraid of Virginia Wolf,” Ms. Ephron writes. While Henry doted on Delia, Phoebe’s maternal instincts were less pronounced, to the point she threw a teenage Delia out of the house one night in a fit of jealousy.

But there was a “day version” of her mother, Ms. Ephron writes, “a great gift—a sense of destiny, identity, structure, discipline, drive. As a woman, she was far ahead of the curve.” Even on her deathbed, Ms. Ephron relates, her mother’s dedication to the written word never failed. Her whispered comment to Nora was “Take notes.”

The remainder of the book’s essays is collected mainly from pieces previously published in the women’s lifestyle magazine More, to which Ms. Ephron is a frequent contributor, and are in a much lighter vein.

There are observations on housekeeping (“only worth doing to the point that the place is clean enough that no one notices it’s not”); her dog (“if you don’t have a dog, you might want to skip to the next essay”); her secular Judaism (“I’m a book Jew,” she replied to one reporter’s query about her religious heritage); and her attachment to the film Seven Brides for Seven Brothers, in which Jane Powell speaks Ms. Ephron’s favorite movie line, “My stew can stand on its own two feet.”

Especially in these lighter pieces, Ms. Ephron’s gossipy, conversational style, replete with incomplete sentences, parenthetical digressions, and quotable one-liners is particularly appealing. It’s a style she lays squarely at the feet of her parents and her sisters, all of whom honed their skills around the dinner table over which her parents presided.

“That’s a great line, write it down,” one of them would say. And Ms. Ephron has done exactly that.