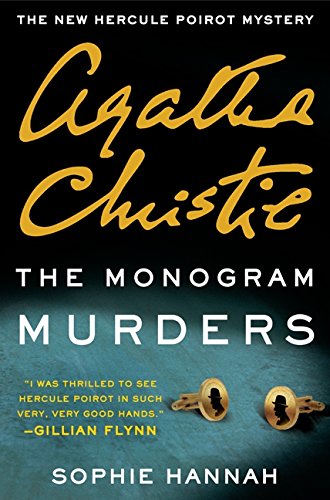 In 1960 after she’d written 37 mystery novels featuring her idiosyncratic Belgian detective Hercule Poirot, Agatha Christie wrote down her opinion of her most famous creation beside Miss Marple. Poirot, she complained, was “a detestable, bombastic, tiresome, ego-centric little creep” of whom she was thoroughly tired. She’d tried to kill him off 20 years earlier in Curtain, but had held the book from publication and would write another 20-odd Poirot mysteries before Curtain finally appeared and Poirot expired in 1975, a year before Christie’s own death.

Given her resentment toward Poirot, one wonders what Christie would make of The Monogram Murders, the detective’s reappearance after nearly 40 years off the page. His resurrection is at the hands of Sophie Hannah and the Christie estate, the latter eager to capitalize on the tremendous popularity of the BBC’s recent Poirot series starring David Suchet as the rotund and fastidious investigator.

Sophie Hannah, known for a string of successful psychological thrillers like The Dead Lie Down and Kind of Cruel, is the latest British writer to reanimate a beloved franchise after Sebastian Faulks’ Jeeves and the Wedding Bells and John Banville’s Raymond Chandler mystery Black-Eyed Blonde, both published last year.

In The Monogram Murders, Hannah, who has characterized Christie’s mystery novels as “holy text,” turns in a respectfully written story that pays reverent tribute to Christie’s elaborate plotting, dialogue-heavy style, and one-dimensional characters. We know three of them only by name, in fact, because they’re already dead at the opening of the story, each victim’s mouth found to contain a monogrammed cufflink and each body laid out in precisely the same manner.

The bodies are discovered in three separate rooms of the Bloxham Hotel in London’s West End, and in no time Poirot emerges from retirement to put “the little grey cells” to work solving the case.

Hannah chooses not to raise from the grave two of Poirot’s long-running companions in sleuthing, Captain Arthur Hastings or Chief Inspector James Japp. Instead, she frames her story from the perspective of a new Chief Inspector from Scotland Yard, Edward Catchpool who, like his fictional predecessors, is left scratching his head at Poirot’s enigmatic investigative techniques.

Chronologically The Monogram Murders would fall about 10 years after Poirot made his first appearance in 1920’s The Mysterious Affair At Styles. Hannah gives us just enough descriptive background to place us in Christie’s London of fusty hotels, fog and high teas, reproduces Poirot’s French-inflected English to perfection, and strews her plot with several barrels’ full of red herrings.

While Hannah’s twisting plot is one that Christie would have admired (her literary trustees, to whom Hannah first told the story, certainly did), one senses she is chafing a bit at the strict protocols of the straight Golden Age mystery, a genre not known for the psychological depth that makes Hannah’s other books so compelling. It’s a lack Hannah attempts to fill by investing Catchpool with a troubled childhood memory reawakened by the murders. This minor subplot goes nowhere, trodden upon by the cascade of revelations and new information that mark the best of the genre for its fans. Poirot rules, and Hannah mostly obeys.

But even in Hannah’s expertly capable hands, Christie’s despairing opinion of Poirot seems unavoidable. In our own day, he would probably be a candidate for treatment for Obsessive/Compulsive Disorder. He’s so rigidly bound by convention and regularity of habit that he grows upset if the silverware on a restaurant table isn’t precisely aligned and squared to the table’s edges, and is brought almost to a state of paralysis at the sight of a loose tile surrounding a fireplace—a disruption that also proves to be a clue to the mystery.

He’s also a classic narcissist, convinced of the infallibility of his opinions and pointedly dismissive of those who fail to appreciate his deductions. “Yours . . . will never match mine,” he bluntly tells Catchpool while comparing their respective deductive abilities. “Instead of looking for the answer, you look around for somebody to find it and tell it to you - eh bien, you find Hercule Poirot!”

Hannah spins such an intricately constructed plot that it takes her two long final chapters and an epilogue to unwind it all, with the obligatory gathering of suspects during which Poirot explains his heretofore obscure observations, the murderer is unmasked, and order is restored.

“Next time you’d like me to grasp something at once,” Catchpool grumbles to Poirot at the end, “open your mouth and tell me the facts, whatever they are. Be straightforward about it. You’ll find it saves a lot of bother.” But the bother is what’s most fun in reading Hannah’s Christie tribute, a chance to use our own little gray cells to outguess Poirot and polish the glimmer of mystery’s Golden Age.