The Riddle of the Labyrinth: The Quest to Crack an Ancient Code 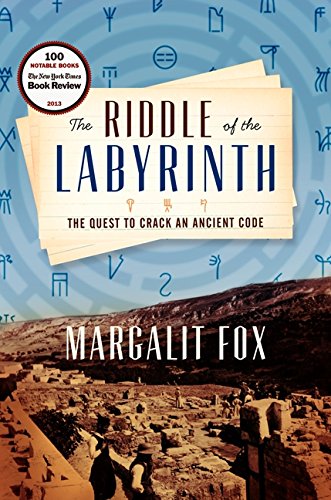 Of all the scientific discoveries that swept the 20th century—from relativity to quantum mechanics to polio vaccine—the deciphering of the writing on thousands of fragments of clay tablets unearthed at the beginning of the century somehow failed to ignite the public imagination.

There were no science-star names attached to the effort, and the practical benefits were of interest only to an academic circle of linguists, archeologists and anthropologists.

Yet, as Margalit Fox demonstrates in her lively recounting of the unraveling of the strange marks and pictograms incised on the tablets more than three-thousand years ago on Bronze Age Crete, the deciphering was a triumph of human intellect and creative thinking.

“The pull of an undeciphered ancient script comes not only from the fact that its discoverer cannot read it,” Ms. Fox writes, “but also from the knowledge that once, long ago, someone could.”

Ms. Fox, a senior staff writer for the New York Times, focuses on three main players in her story, characters whom she labels The Digger, The Detective, and The Architect.

The Digger is the British archeologist Sir Arthur Evans who, in 1900, began to unearth the Bronze Age Minoan capital of Knossos, the legendary site of King Minos’ palace and its mythical labyrinth. Along with bringing to light room after room of an extensive and sophisticated royal administrative center, Evans removed and carefully guarded the clay shards found in some of the rooms bearing an unknown script he named Linear B.

The discovery, as one of Evans’ assistants later wrote, “carries back the existence of written documents in the Hellenic lands some seven centuries beyond the first known monuments of the historic Greek writing.” The tablets were, and remain, the earliest known written documents in Europe.

The problem was that, unlike the discovery of the bilingual Rosetta Stone in Egypt nearly a century earlier, which allowed the decoding of Egyptian hieroglyphics by conveniently providing a companion text in easily read Greek, Linear B had no such transcription in any known script. As Ms. Fox points out, it was an unknown script that wrote an unknown language, the linguist’s double jeopardy. The mystery would remain unsolved for over 50 years.

The Detective is an obscure professor of Classical languages at Brooklyn College named Alice Kober, to whom Ms. Fox dedicates the largest and most detailed section of her book, painting a convincing portrait of Kober as the unsung hero of her story. It was Kober who developed the techniques and comparative processes on which the Linear B code was eventually cracked, two years after her death in 1950.

Drawing on Kober’s previously ignored correspondence during the two decades she wrestled with Linear B, Ms. Fox details Kober’s two key discoveries about the script: that it was gender-inflected and that each marking represented a syllable of a word, rather than the letter-specific sounds of later languages.

Kober’s meticulous and dense analysis was undertaken in what little spare time was left to her after a busy teaching schedule, mostly the evening hours when she would work at her dining room table building a cross-referenced catalog of every Linear B figure on scraps of paper, a scarce commodity during World War II, when she was hardest at work on the project. She used the backs of advertising posters, invitations, holiday cards and whatever else she could find to record her work, and arranged them in file boxes made out of cigarette cartons.

Finally, The Architect is the Englishman Michael Ventris, trained and working in that profession but, like Kober, fascinated with Linear B from an early age.

Although Ventris corresponded briefly with Kober and met her during Kober’s year in England on a Guggenheim fellowship, she was dismissive of his theory that Linear B was derived from Etruscan, a conviction Ventris held until he intuited virtually overnight that Linear B was actually a kind of proto-Greek, with early forms of the grammatical and syntactical rules that later appear in the Classical Greek of Homer a thousand years later.

“Chronologically, the Greek dialect [the tablets] contained was as distant from Classical Greek as the Anglo-Saxon of Beowulf is from Shakespeare,” Ms. Fox notes.

The Linear B inscriptions, as it turned out, were hardly ancient literature. Rather, they were entirely quotidian lists of livestock transactions, annual harvest tallies, and other such daily details of a thriving civilization dutifully kept by royal scribes. Kober had suspected as much very early on, telling a lecture audience that “we may only find out that Mr. X delivered a hundred cattle to Mr. Y on the tenth of June, 1400 BC.”

But far from a dry recounting of intellectual history, Ms. Fox fleshes out her three characters with humanizing detail. Evans, a wily tactician as well as an honored archeologist, kept the tablets close to home and published only small bits and pieces for his fellow scholars to study.

Complete transcriptions of the Linear B tablets were not published until some years after Evans’ death. Kober, when she was mentioned at all by her exclusively male peers, was characterized by them as a dull, spinsterish pedant; but she comes across in Ms. Fox’s hands as a lively, witty and acerbic student of human nature who lived her entire adult life in her family’s Brooklyn house and read mystery novels for distraction. Ventris grew up with cold, distant parents influenced by the theories of Carl Jung, had difficulty maintaining normal adult relationships and, four years after solving the riddle of Linear B, died in a car crash that some observers believe may have been suicide.

While Ms. Fox, in the manner of Dava Sobel’s Longitude, writes a compelling prose to frame a scientific detective story, Alice Kober’s heretofore neglected role in the deciphering of Linear B is the book’s other and no less important achievement.

Kober herself, though, might have felt uncomfortable with the recognition. “Rivalry has no place in true scholarship,” she once wrote to a colleague. “The important thing is the solution of the problem, not who solves it.”