The Track of Sand (Inspector Montalbano) 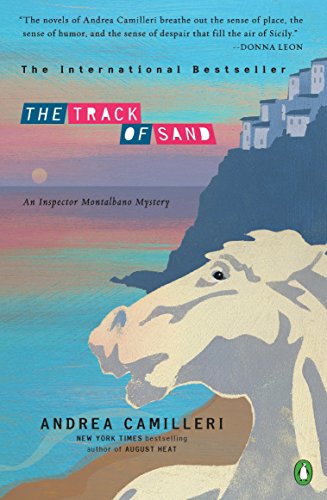 Since he first stepped onto the page in 1994’s The Shape of Water, Andrea Camilleri’s Inspector Montalbano has faced down gunrunners, drug lords, gambling rings, and his own mortality.

In The Track of Sand, the twelfth novel in this popular mystery series, Salvatore Montalbano has more trouble on his hands when he discovers a brutally beaten horse lying dead on the beach next to his seaside home in Vigàta, a stand-in for Mr. Camilleri’s own hometown, Porto Empedocle, in Sicily. In a brisk 250 pages, Mr. Camilleri sends Montalbano into the arms of a beautiful equestrienne, into the hills above Vigàta where a human body is found clad only in underpants, and to an elegant horse race for charity with a cast of eccentric aristocrats and a deeply felt dark undercurrent.

Montalbano is hugely popular in Italy, where most of Mr. Camilleri’s series has been adapted for Italian television. Unlike the somber Venetian beauty that suffuses Donna Leon’s Commissario Brunetti series, Mr. Camilleri’s Montalbano books sparkle with the southern sun.

Montalbano is a kind of Mediterranean Colombo, but Mr. Camilleri has endowed his creation with a rich Sicilian heritage and a personality that is as likely to erupt in operatic emotionalism or gastronomical reminiscences as in the usual scrutinies of the police procedural—all overlaid with the sardonic humor of southern Italy.

The Inspector has relationship problems which include a past love, Livia; a Swedish beauty named Ingrid who sleeps in his bed but chastely abstains from sex; and a 20-year-old former lover whose name Montalbano refuses even to utter. At work, he is surrounded by colorful, if sometimes bumbling, underlings whose speech, in Stephen Sartarelli’s brisk translation, speak in a patois that unfortunately for English readers makes them sound nearly illiterate. “I dunno if I gotta nuffa time a tidy uppa you’ whole house,” says Montalbano’s housekeeper, the redoubtable Adelina.

This latest outing for the Inspector finds him, as in previous puzzles, dealing with the long reach of the Mafia; but the plot is almost secondary to Montalbano’s struggles with Italy’s top-heavy bureaucracy, with the increasing physical indignities of his 56 years, and his bemused attitude toward the many human foibles that have kept him busy through 16 years and 12 books. Or make that 16 books, since The Track of Sand, published in Italy in 2007, has been followed there by four more Montalbano stories as the prolific Mr. Camilleri produces an average of two novels each year—all hopefully destined for English-language versions.

Like the antipasti that Montalbano contentedly consumes, the stories are light and easily consumed, leaving one eager for the next course.