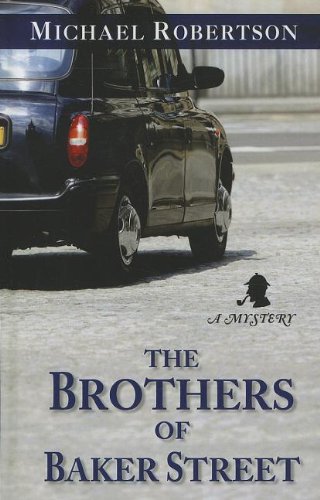 Arthur Conan Doyle may have griped about his literary enslavement by his most famous creation, a complaint amusingly portrayed in last year’s The Sherlockian by Graham Moore, but Doyle died a wealthy man and one of the world’s most famous thanks to Sherlock Holmes. The same cannot be said for Reginald and Nigel Heath, the very contemporary barrister brothers of Michael Robertson’s The Brothers of Baker Street, whose involuntary attachment to Holmes only brings disaster.

In 2009‘s The Baker Street Letters, the opening installment of what promises to be a series, Mr. Robertson set up an ingenious conceit, installing Reggie and Nigel’s law chambers not only on Baker Street but in a building occupying the very site of what would have been 221B, the storied bachelor flat of Holmes and Watson. The building’s management is constantly flooded with letters to the great detective from reality-challenged Holmes fanatics, so rental contracts for tenants require them to answer all such correspondence with a supplied form letter.

In The Baker Street Letters, Reggie Heath took this responsibility too lightly, while brother Nigel took it too seriously; Nigel ended up in California escaping a framed murder charge and Reggie’s law practice and bank account suffered grievously after he cleared a client of a murder rap who later turned out to be guilty as charged.

As Mr. Robertson’s second novel opens, Reggie is still nursing his wounds and has sworn off taking on any further criminal cases; Nigel’s still in California; and the entire Baker Street law practice consists of Reggie and secretary Lois who, Mr. Robertson informs us, “had the general shape of a bowling ball, and the enthusiasm of one crashing at high speed into pins.” Reggie’s heartthrob, the fetching actress Laura, has taken up with the Murdoch-like tycoon of a tabloid media empire, and a letter arrives at the office signed by a descendant of Holmes’ archenemy, Moriarty, vowing revenge for Moriarty’s death at Reichenbach Falls—the writer laboring under the delusion that Reggie is a descendant of Holmes’.

All this is established briskly and with wry humor in the book’s opening chapter before Mr. Robertson sets his story in motion by means of an attractive solicitor who wants to break Reggie’s abstinence from criminal cases by taking on her client, a London cabbie accused of the murder of two American tourists.

Deftly manipulating the constraints of the genre, Mr. Robertson proceeds to give us clandestine skullduggery on foggy London docks, clues fished out of the Thames mud, cab chases through the streets, a lonely country house harboring someone with a gun and a deadly secret, and an explanation for it all at the end.

Mr. Robertson’s first book was cited for its intricate plotting and appealing main characters, and readers will not be disappointed with this second effort as Mr. Robertson shifts his story into overdrive, carrying us along at such a pace that we only notice the contrived and rather bizarre underpinnings of the solution when we coast to a stop at the end and have time to reflect on the journey.

Both Reggie and Nigel (who returns to London midway through the book) are raffish and inventively devious in their pursuit of the truth. “Are the Heath brothers genetically inclined to despise their clients,” a law court judge inquires at one point, “or is it the legal system in general they object to?”

And Laura emerges as much more than a love interest, a sleuth in her own right who at one point ends up dangling from Tower Bridge after another nightmarish cab chase.

But there’s no denying it was a heck of a ride, and fun to boot, which is all we need ask of the kind of puzzle story Mr. Robertson so ably delivers.