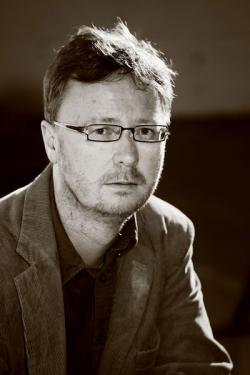 Tony Bailie’s third novel, A Verse to Murder, is available as an ebook on Kindle. His previous two novels, ecopunks (2010) and The Lost Chord (2006), both Lagan Press, are available as paperbacks. He has also had two collections of poems published: Coill (2005) and The Tranquillity of Stone (2006), both with Lapwing Publications. He works as a journalist in Belfast.

The Lost Chord
This item is no longer valid on Amazon.
Tranquillity of Stone

“An undercurrent of slow dread seems to permeate the small, inconsequential details of daily routine, throwing into stark relief the paranoias that are lurking close to the surface.”

“The Nine Cloud Dream is inhabited by Buddhist philosophy—the world of dust is illusion and all the earthly scheming, deceptions, plots, and sensual pleasures are transient and ult

"Civil wars, revolutions, invasions and fascist dictatorships formed the political backdrop that defined the works produced in Madrid over the centuries."

Elegy for April: A Novel (Quirke)

The weather is like a character in this novel, lingering in the background and occasionally being given a few lines.

Investigations of a Dog: And Other Creatures

The Mountains of Parnassus (The Margellos World Republic of Letters)

An unfinished science fiction novel by Nobel Prize winning poet Czeslaw Milosz . . . sounds intriguing doesn’t it? Unfortunately the pitch is much stronger than the final product.

Falling under the category of “man drops out of society and goes off to desert to find himself,” this short novel loses direction midway through.

“an homage to political cartoonists and their ability to define a moment or mood in a few pen strokes.”

Anger and outrage drip from the pages of this short single-paragraph novel. It is a rant against a county, its people, and family.

The psychological tortures that  Roberto Arlt puts his main protagonist through are on a par with those endured by Raskolnikov in Crime and Punishment or Dmitri Karamazov.

If you are going to read this novel, make time to do so. There is no point in starting and then going off to do something else, for when you come back you will probably have to start again.

The Things We Don't Do

“many of the stories have the feel of being a novel in gestation.”

A Brief History of Portable Literature

The Dream of My Return

“a short, funny and rather disturbing novel . . .”

“Bolaño is not a writer who can be read at a purely literal level—or rather he can, but doing so would be like watching a color movie in black and white.

“Javier Cercas is a seasoned polisher of Spain’s recent past, taking a single event or memory and rubbing at it and peeling away the dust of myth that has

From Out of the City (Irish Literature Series)

“Often the prose often becomes functional, leaden—rhyming off lists, dates in history, naming streets—but this serves to accentuate the more lyrical passages, the flecks of gold glinting in

The African Shore (The Margellos World Republic of Letters)

Quite often it is what is not said in this novel that resonates more than what is said.

My Fathers' Ghost Is Climbing in the Rain

The House of Rumour: A Novel

“The House of Rumour is worth the effort.”

The Testament of Mary

“Beautiful prose, tangible emotion, and a constantly lingering sense of dread make what should be a fairly short reading experience an intense and disturbing experience.”

Who Is That Man?: In Search of the Real Bob Dylan

“Who Is that Man? is a superb dissection of one of the most enigmatic figures in modern music.”

The Third Reich: A Novel

“There are better Roberto Bolaño novels already out there, but The Third Reich stands up well and gives us an intriguing insight into how their author’s world view was informed by

From the Mouth of the Whale: A Novel

“Sjón—deftly translated into English by Victoria Cribb—writes a rich layered prose that, like his protagonist, seems to spring from the extremes of Icelandic dark and light. . . .

A series of prose vignettes, an extended verse poem and a sequence of short meditations form the three sections of this bilingual collection.

“There are layers and depths to this short novel that only surface after the last page has been read, and it has been set aside and that leave you reaching for it to start reading again.”

“Each poem reaches a moment when the mood changes, a moment of epiphany that jolts the reader out of his comfort zone and the everyday shimmers slightly as perspectives shift.”

“Mr. Kershaw displays integrity in his journalism as well as a passion for music delivered from the heart—both of which lift this story well above the average celebrity bio.”

A Death in Summer: A Novel (Quirke)

“This is an elegant novel, well-paced with dramatic twists, disturbing surprises and richly drawn characters whose actions and motives have a tangible psychological depth.”

“Nemonymous Night is not an easy read; however—and here’s the rub—it’s entirely readable.”

Reading this novel could leave you with a huge hangover—the amount of alcohol consumed by its narrator and his cronies is astounding and would have floored even Charles Bukowski.

Reading Ezra Pound can be a demanding experience as he often slips into French, Spanish, Italian, or ancient Greek—using the Greek alphabet of course.

Even the most enthusiastic admirers of the late Roberto Bolaño must wonder sometimes if there is really a case for posthumously publishing everything that he ever wrote.

Dr. Zhivago is a big book, physically and in terms of its themes, multi-stranded storylines and historical backdrop.

History seems to collide with the present and manifest itself physically in this novel. “Mountain Spirits” and even an occasional ghost also glide through the pages.

Jakob Sammelsohn hovers on the fringes of central European history, meeting real life figures and becoming caught up in landmark events of the late 19th and early 20th centuries.

Obabakoak: Stories from a Village

The subtitle of this collection, Stories from a Village, is slightly misleading, for while some are set in the fictional Basque village of Obaba many of them are not.

My Life as a Russian Novel: A Memoir

Identity and the way people develop a persona to deal with the world is the main theme of this novel.

On page 66 of this slim novel, a character called Bolaño is quoted as saying: “Tell that stupid Arnold Bennet that all his rules about plot only apply to novels that are copies of other novels.” Pe