To Walk Alone in the Crowd: A Novel 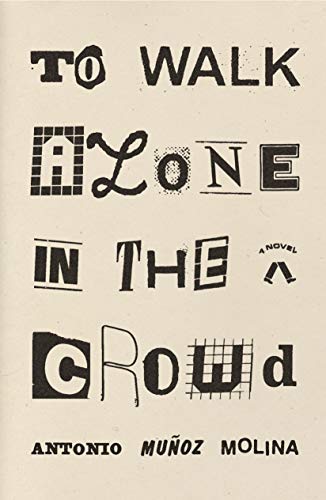 “Muñoz Molina writes in the first person about his own life. But he also becomes a character in his novel along with those writers who seem to obsess him, and even the reader gets dragged into the narrative.”

In a world of climate change, political extremism, wars, mindless violence, and disconnection from our fellow human beings Antonio Muñoz Molina travels into an alternative reality of literature, music, and art.

He writes: “I like literature that has the disruptive and intoxicating effect of wine or music, making me forget myself, forcing me to read it aloud and to give in to its contagion, explaining the world to me while setting me at war with it, giving me shelter even as it reveals the horror of everything around me as vividly as its beauty.”

Yet the written and spoken word can both be liberator and captor. The words of advertising slogans, newspaper headlines, news reports, and overheard conversations on the streets and on the Madrid metro at times seem to reach an unbearable crescendo.

“I become aware of the full volume and intensity of the endless noise that I failed to notice even as it was drowning out my voice and everything else around me,” he writes.

For him the world seems to be literally falling apart: “Every day the papers said that a new temperature record had been set, that larger swaths of ice were melting in the North Pole and Antarctica. Blue or emerald cliffs crumbled into the sea as solemnly as ancient temples brought down by earthquakes. “

The 19th century English writer Thomas De Quincy, French poet Charles Baudelaire, American writer Edgar Allan Poe, and Irish novelist James Joyce are his companions as he navigates the streets of Madrid and New York where he lives and other cities that he visits, a notebook in his hand as he jots down what he hears and reads.

“I always bring with me my traveling office. My office of lost moments. Clippings, headlines, notebooks filled in pencil from the first page to the last, interleaved with old newspaper articles or brochures and glossy ads from fashion magazines: slogans, silhouettes, single words that I glue into the notebook like the illustrations in a book, sometimes on the cover, or wherever I can find a little space.”

He muses that Baudelaire who lived in Paris reads about the city imagined by Edgar Allan Poe who had never been there and yet Poe’s version of Paris become more real for Baudelaire than the actual city.

To Walk Alone in the Crowd: A Novel is in many ways misleading title, for this is more than a novel, it is travelogue, autobiography, biography, political commentary, and an environmental call to action.

There are more extended sections, novels withing the main novel, meditations on the lives of writers, musicians and artists, almost as if by getting inside an incident or some aspect of their work that he can re-assemble their essence.

The story of German Jewish philosopher Walter Benjamin, in particular seems to haunt  Muñoz Molina—his flight from Nazi Germany and his attempts to escape from Europe to the US and his suicide in Catalonia as he faced deportation back into Nazi-occupied France.

Muñoz Molina writes in the first person about his own life. But he also becomes a character in his novel along with those writers who seem to obsess him, and even the reader gets dragged into the narrative.

It almost becomes too much and the wall of words seem to be taking on a life of their own that no longer simply describe the world but define it and in many ways now create it. To Walk Alone in the Crowd: A Novel invites the reader to become immersed in it and by doing so to be altered. One of the headlines quotes is: “Travel to another world without leaving your couch.”

“He seems to be simultaneously writing and living what he recounts,” he writes, referring to De Quincy, but he could be writing about himself.

On the final page Muñoz Molina writes: “Baudelaire’s invitation to a voyage was happening to me, in my own city, free of charge and just a few blocks from the office where I worked. I looked and listened to the city until my mind began to dissolve in it as in an opium dream, and I could see myself as well from the outside. I saw the silhouette of a man walking alone in the crowd.”

This is a novel for our times, disjointed, bite-sized sections to ensure our Twitter-moulded minds never lose interest and move on to something else before we get bored. Headlines, soundbites, street sounds, gossip, arguments, and high art scramble through the chaos of words.

Yet somehow it all knits together like the different coloured loops in an intricate mandala that when you stand back from it takes on a hypnotic form to draw you into a world that is of and yet somehow beyond this world.