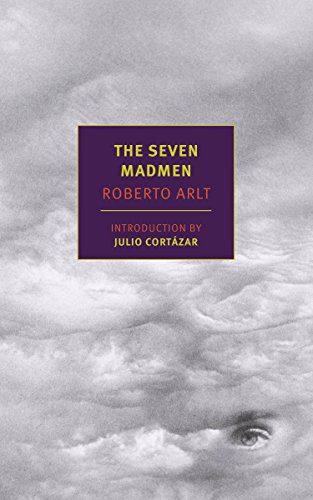 The psychological tortures that  Roberto Arlt puts his main protagonist through are on a par with those endured by Raskolnikov in Crime and Punishment or Dmitri Karamazov.

Dostoevskian, as it says on the blurb, does indeed sum up the tone and texture of this novel, first published in Spanish by Arlt in 1929 in his native Argentina.

Set in the underbelly of Buenos Aires there are two crimes around which the plot revolves: a minor theft and a planned kidnap and murder.

Erdosain is sacked from his job as a money collector after it is discovered that he has been skimming off cash. Within hours his wife has also left him for another man. These personal disasters lead to a psychological meltdown for Erdosain and as he tries to borrow the money to repay his former employer he comes into contact with a series of sinister characters: the other six madmen of the title.

The Astrologer has the most benign sounding name, but he is by far the most psychopathic. The Melancholy Thug and The Man Who Saw the Midwife are among the other ensemble cast.

The Astrologer has plans to enslave the majority of his fellow countrymen and create a privileged elite. He intends to fund the first stage of his scheme by opening huge brothels that will be run on an industrial scale.

It is Erdosain who comes up with the scheme to kidnap his former wife’s cousin, extract the money from him, then murder him to kickstart the brothels.

The working out of this strand has all the elements of a sinister black comedy, but this novel and themes of mass enslavement of the population and the establishment of an elite master race predate events that would take place in Europe and South America in the following decade.

The year after The Seven Madmen was published there was a right-wing military coup in Argentina whose leaders looked to the politics of fascist Italy as their model. Arlt takes us through the dark alleys of 1920s Buenos Aires, into brothels and the life of petty criminals and those who exist rather than live in unending poverty.

Erdosain’s identity is shredded as he grapples with the dissolution of his previous life and contemplates the kidnap and murder plot in which he has become mixed up. “Erdosain . . . was trying to puzzle out why there was such a huge void inside him, a void that engulfed his consciousness, leaving him incapable of finding the words to howl out the eternal suffering he felt.”

Gritty social realism underpins the extravagant plans for a vice-funded coup but it is the psychological coup that overthrows Erdosain’s sanity that provides this novel with its most rewarding passages and insights.