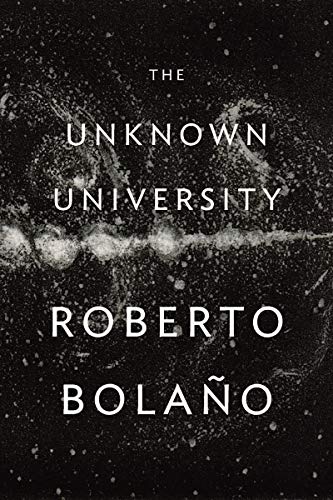 The novels and short stories of Roberto Bolaño are populated by poets fictional and real. The two anti-heroes at the heart of one his best known novels, The Savage Detectives, are poets and their stories are orbited by a host of other poets and poet wannabes.

Those who have read Mr. Bolaño’s essays and criticism in the collection Between Parenthesis will know that he regarded himself as a better poet than novelist: “The poetry makes me blush less.”

But there has been little for non-Spanish speakers to test this assertion until now.
The Unknown University will have Roberto Bolaño aficionados drooling for months. It is a bilingual doorstopper, with the original Spanish versions of his poems and their English translations set on facing pages.

It is a gift for those with who speak and read some Spanish, even just a little, allowing them to see the Chilean-born writer, who spent his youth in Mexico and most of his adult life in Spain, at work in his native tongue.

The poems themselves vary in quality; some are simply broken sentences whose sole purpose seems to be to set out an idea or scenario with little thought for poetic technique.

Others are true image-driven poems enriched by rhythm and rhyme but always with a dark center:

What draws me to you.
The dream that becomes a nightmare.
The murmur of the sea and of rats
In the abandoned factory.
Knowing that after everything you’re there,
In the darkness. Alone and with open eyes.
(from "She Reigns Over Destruction")

Others piece make little pretense at assuming poetic form and are simply blocks of prose—though of course being Roberto Bolaño it is a withered and evocative prose with dark undertones:

"Silence hovers in the yards, leaving no pages with writing on them, that thing we’ll later call the work. Silence reads letters sitting on a balcony. Raspy sounding birds like throatiness, like women with deep voices. I no longer ask for all the loneliness of love or the tranquility of love or for the mirrors. . . ."
(from “Never Alone Again”)

The better poems/prose pieces are like mini novels with characters, scenarios, locations, emotions and of course a vaguely articulated terror weaving through them, all in the space a of a page or two. Drug addicts, prostitutes, assassins, illegal immigrants, and detectives are the subject matter.

Those who have read Mr. Bolaño's novels would of course expect nothing less, but here there is no attempt to hide the narrative voice of Roberto Bolaño behind a fictional façade—even if his literary alter-egos, such as Arturo Belano in The Savage Detectives are often barely disguised.

We get to see into the dark heart of Mr. Bolaño in these poems that draw upon his life, partners and lovers, children, and friends. His declining health, exile, and the act of writing itself, particularly poetry, are recurring themes.

There has been a deluge of posthumous material released since Mr. Bolaño died 10 years ago and most of it has been of surprisingly high quality, although with a few exceptions, most disappointingly last year’s publication of the “unfinished” novel Woes of the True Policeman.

The Unknown University falls into the high quality bracket. In fact for any true Roberto Bolaño devotee it is a must have.