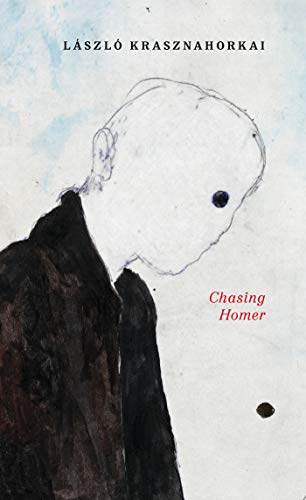 “at a single-word turning point the context shifts and all previous assumptions are cast aside . . .”

There is a moment in this short novel, a single word close to the very end, when all that has gone before is cast in a new light and everything falls into place.

It is done so brilliantly that you don’t even resent having missed such a key element to the story much earlier.

There are no clues along the way, subtle signposts as to what is going to be revealed—it is suddenly there and all that you have just read shifts into an entirely new context.

Chasing Homer is presented as an objet d’art, not just words on the page of a book, but illustrations and a percussive soundtrack, accessed by QR codes, at the start of each chapter.

The illustrations by artist Max Neumann are mostly mono, or with the colors desaturated, to create an evocative side narrative to the text.

They are not depictions of the story, but rather a parallel exploration that takes the novel’s theme of flight and isolation as a starting point to create pieces that exist in their own right.

Similarly, the soundtrack by Szilveszter Miklos, a jazz drummer, stands alone as an evocative soundscape, but which wraps itself around the words and pictures it accompanies.

Each of the novel’s short chapters is a single sentence, with an occasional one-line interjection along the way.

The first-person narrator, who is never named in the text, but whom we can presume is the Homer of the novel’s title, never tells us what he or she is fleeing from as they progress down along the coast of the Balkans and the islands of the Adriatic.

The history of Europe in the last century, of flight, exile, ethnic cleansing, genocide, and persecution suggest themselves as backdrops to Chasing Homer.

More recent events, refugees fleeing conflicts or poverty in other parts of the world and being scapegoated by the countries in which they have sought sanctuary also feed into this symbolic tale of our times.

We are never told what or who the narrator is fleeing and at times it even seems that Homer does not know. Fleeing has become a way of being, a state of mind with which he/she identifies and is defined by.

“I myself don’t know where I have come from, since I have no memories whatever, thanks to the fact that nothing I’ve left behind possesses the least significance, the past doesn’t exist for me, only what’s current exists, I’m a prisoner of the instant, and I rush into this instant, an instant that has no continuation. . . . I have no need for past or future because neither one exists.”

It is only at the single-word turning point, which is on the penultimate page of the novel, that the context shifts and all previous assumptions are cast aside.

The meandering syntax, translated from Hungarian by John Batki, the existential angst and sense that we define ourselves through language and that language cannot properly define us, is reminiscent of Samuel Beckett.

The terror of persecution and the no clear understanding of why they are being persecuted, the namelessness and facelessness of the persecutors also suggests Franz Kafka.

For those who have been intrigued but daunted by Laszlo Krasznahorkai’s longer and denser works such as Baron Wenckheim’s Homecoming and Seiobo There Below, Chasing Homer is perhaps a more accessible introduction.

However, it is no less dense and that one word twist may well send you straight back to the start to reread it with new insights to restudy Neumann’s paintings with a renewed intensity, and listen to Miklos’ soundtrack with fresh ears.