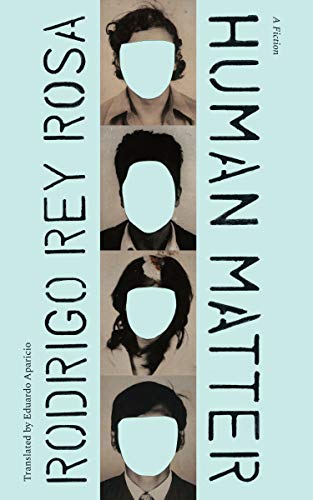 “An undercurrent of slow dread seems to permeate the small, inconsequential details of daily routine, throwing into stark relief the paranoias that are lurking close to the surface.”

Political violence in Guatemala—past and present—and how it filters into the life of one of its citizens drives this short, intense novel.

Rodrigo Rey Rosa writes in the first person, using his own back story, diary entries, investigative journalism, and philosophical meanderings as his narrative vehicles.

He visits Guatemala’s National Police Archive, which holds records covering a 60-year period, of tens of thousands of people arrested or who have come to the attention of the authorities.

In the opening pages he records a series of brief sketches of some of those documented and the various “crimes” they were held for: “Kidnapping,” “complicity in theft of chickens,” “shining boots without a license,” “streetwalking,” “practicing occult sciences,” “damaging a flowerbed,” “being a communist,” “being a terrorist,” and “booked for no reason.”

However, the archive and Rey Rosa’s research there becomes a locus around which this novel orbits rather than the story itself.

Present and former staff come to the fore and their lives, or recollections and rumors about them, weave in and out of snapshots from the novelist’s life and the violent country in which he lives.

The political murder of a visiting congressman from El Salvador, the abduction of Rey Rosa’s mother when he was a young man, political coups, and ethnic violence against the indigenous people of Guatemala seep into the narrative.

Minutiae from the author’s life form a counterpoint—picking up his young daughter from school, fights with his girlfriend, lunch with his parents, visits to Europe, reflections on books that he is reading or art exhibitions that he visits.

And then there are casually dropped in twists that stop the reader short and make us question our running assumptions about the author/protagonist.

“In the afternoon, another argument over the phone with [his girlfriend] . . . We went to an Italian restaurant for dinner, and then to El Establo bar. Afterwards I went alone to a brothel.”

An undercurrent of slow dread seems to permeate the small, inconsequential details of daily routine throwing into stark relief the paranoias that are lurking close to the surface.

Rey Rosa fears that his research at the archive is drawing attention to himself from those who would rather have its contents barred to public scrutiny. He suspects that one of the archivists may have been involved in his mother’s kidnapping decades earlier.

He contemplates going into exile: “the idea of emigrating yet again . . . does not seem reasonable to me, at least not yet. That is to say, I do not feel sufficiently threatened to flee. Meanwhile, I keep looking at the news.”

Authors engaging with the history of their homeland and how that filters into their lives at a personal level seems to be an ongoing theme for Latin American and Spanish authors.

Colombian novelist Juan Gabriel Vásquez becomes a character in his own fiction as he delves into the conspiracy theories surrounding two high-profile political murders in Bogotá during the last century in his newest novel The Shape of the Ruins.

While in Spain Javier Cercas, author of bestselling Soldiers of Salami, returns to the Spanish Civil War and his family’s involvement in it for his “nonfiction novel” El monarca de las sombras soon to be published in an English translation as Lord of all the Dead.

The late Roberto Bolaño, in his collection of essays and reviews Between Parentheses, described Rodrigo Rey Rosa, as “a master of endurance, he’s a shadow, a ray of lightening shooting across the space of normality.”

In Human Matter, Rey Rosa turns abnormality into a new normal, where spending time with his young daughter or having a drink in a bar with a friend is a welcome break from the political and personal violence that seem to constantly linger and that threatens to erupt on the next page.

By the end of this novel you feel glad to have come out on the other side and carry the hope that Rodrigo Rey Rosa, those close to him, and his fellow countrymen will do so, too.