The African Shore (The Margellos World Republic of Letters) 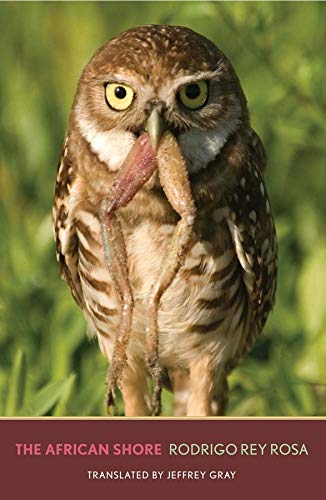 Quite often it is what is not said in this novel that resonates more than what is said.

Hamsa, a young Moroccan shepherd, is tasked by his uncle to watch a part of the coast one night while a speedboat traveling from Spain approaches. He is to signal with a lantern if there are soldiers and police patroling the shore close to the city of Tangier.

Hamsa agrees and immediately begins thinking of how he will be able to fight off sleep by “eating red ants or the dirt of an ant hill, drinking water with lice, or wearing an amulet made of an owl’s eye.”

Why his uncle would want to land on the north coast of Africa in a speedboat before traveling the few miles back across the Straits of Gibraltar to Spain is not considered by Hamsa.

“You will have cars and as many women as you want—even though they really cause a lot of problems,” his uncle tells him.

While he may be naïve about drug smugglers, Hamsa is not an innocent and within a few pages he is taking out his sexual frustration on a young boy and planning a theft.

The second, and the main strand of this short novel, is the story of a South American tourist whose passport has been stolen while on vacation in Tangier. He is not named until a few pages toward the end in a deliciously chilling twist. He uses the theft as an excuse to linger in the North African city and writes back to his wife in Colombia asking her to forward money until he gets a new passport.

While Rodrigo Rey’s writing is often parted down to basic—though always compelling—prose, his descriptions of Tangier, its Casbah, Medina, and surrounding countryside are richly evocative.

On a whim the Colombian buys an owl at one of the markets, and this becomes a source of friction as others try to buy and steal it from him.

The African Shore is loaded with symbolism, the seeing owl gives us another perspective into events, while the location in a part of Africa that is within sight of Europe allows Rey Rosa to expand the theme of looking from one world into another.

Even the Colombian protagonist occupies a border territory between the privilege of being a “westerner” among Africans who aspire to his lifestyle, while at the same time being a penniless, drifting South American briefly taken into the world of privileged and moneyed Europeans who are of, but separate from, the country they live in.

A series of letters from the Colombian’s his wife (or is she simply his girlfriend?) back in South America causes another shift in perspective and a reassessment of previous events.

Rodrigo Rey Rosa is a Guatemalan novelist whose short, minimalist prose demands being sifted through to uncover layers and interwoven strands that make the reading of The African Shore a rich and intense experience.

This edition comes with a short biography, translation notes in both Spanish and Moroccan Arabic, and a brief textual analysis.