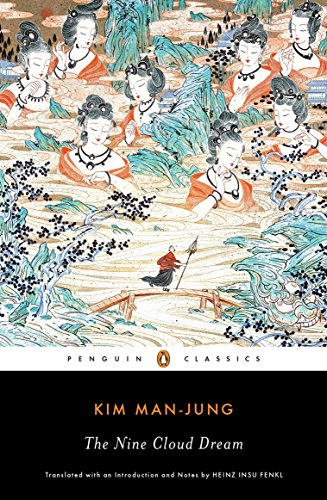 “The Nine Cloud Dream is inhabited by Buddhist philosophy—the world of dust is illusion and all the earthly scheming, deceptions, plots, and sensual pleasures are transient and ultimately meaningless.”

A hard-drinking poet who sleeps with lots of women and gets into a few fights along the way—it could be the plot of a Charles Bukowski novel.

However, The Nine Cloud Dream—Kuunmong in Korean—is a 17th century novel, regarded as a masterpiece of Korean literature, although it is set more than 1,000 year earlier in Tang Dynasty China.

He is born into poverty to an elderly mother and a hermit father, who “dwelt among the dust of this Earth in this mortal form,” but as soon as his son is old enough departs to a higher existence.

As for Shao-yu: “As a newborn he still recalled the events of his previous life on Lotus Peak, but as he grew older and knew the love of his parents, the memories of his former existence faded away, and soon they were entirely forgotten.”

The eight fairy maidens who flirted with the young monk Hsing-chen are also banished to the world of dust for their transgression and scattered across China.

Shao-yu grows to become a precocious youth who, in the best tradition of adventure stories, goes off to seek his fortune, beguiling everyone he meets with his beautiful poetry, musicianship, and military skills.

He is soon a confidant of the Emperor and sent off to do battle with rebellious Tibetans, drinking heavily, falling into bed with women left, right, and center, and writing poems.

He marries two princesses, and takes on both their maids as concubines, sleeps with a courtesan and her best friend and even a dragon woman whose scales fall away from her as she assumes human form.

Each of his wives and lovers are of course the mortal incarnations of the eight fairy princesses, who all end up bearing Shao-yu children.

Shakespearean twists and comic turns see the females disguise themselves as boys, and Shao-yu as a girl, to fool one another. One of his lovers even pretends to be dead, as a joke, to see if he will recognize her when she turns out to be one of the princesses he marries.

There are courtly dramas as the emperor and his mother connive to ensure that the princess, sister of the emperor, marries Shao-yu.

It should of course all be read as allegory as The Nine Cloud Dream is inhabited by Buddhist philosophy—the world of dust is illusion and all the earthly scheming, deceptions, plots, and sensual pleasures are transient and ultimately meaningless.

In the final chapter the frolicking is put into context as, quoting from The Diamond Sutra, we are told: “All things conditioned are like dreams, illusions, bubbles, shadows—like dewdrops, like a ﬂash of lightning, and thus shall we perceive them.”

The blurb compares The Nine Cloud Dream to Hermann Hesse’s Siddhartha, and that is a useful reference point. Driven by set pieces, poetic prose, and Buddhist, Taoist, and Confucian philosophy, The Nine Cloud Dream can be read as a quaint period drama or as esoteric parable.