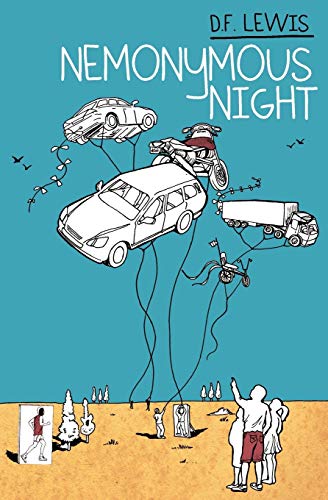 “Nemonymous Night is not an easy read; however—and here’s the rub—it’s entirely readable.”

The act of reading any novel requires a willingness on the part of the reader to submit to the author’s vision, but this novel makes demands that go well beyond what is usually expected.

To “get it” you must be totally tuned in to the frequency on which author D. F. Lewis is working. Failure to do so will leave you floundering in an undulating sea of words.

Plot? Not so much.

A couple of kids turn up missing in an unnamed English city, but then they are found. Or maybe they aren’t. The entire population has been overcome by a dream sickness in which reality and time seem to warp. And then there’s this business about a carpet, which might or might not be magic?

Then characters swap identities and are barely rooted in one another’s perceptions, while the time streams in which they exist undulate, cross over one another, and twist back in on themselves.

Any pretense at a linear narrative into which you can place events and relate them to one another has been abandoned. As such, the terrain of Nemonymous Night seems to be the unconsciousness where dreams intersect with reality.

But whose unconsciousness? Perhaps it is a matrix where the dreams and psychic flotsam of different people mingle in an attempt to construct an agreed-upon version of reality before drifting off?

As you’ve probably figured out by now, I never quite tuned in to D. F. Lewis’s frequency.

Comparisons with Douglas Adams, Philip K. Dick, and James Joyce’s Finnegans Wake suggest themselves as literary reference points, but don’t let fmailiarity with those fool potential readers into a sense of complacency.

Nemonymous Night is not an easy read; however—and here’s the rub—it’s entirely readable. If you got through Dylan’s Tarantula and thought it was a seamless masterpiece and that Beckett’s The Unnamable is a bit light for your tastes, then by all means, give this one a try.

If you have no idea what I’ve just spent many paragraphs attempting to express, perhaps you ought to move on to another book.