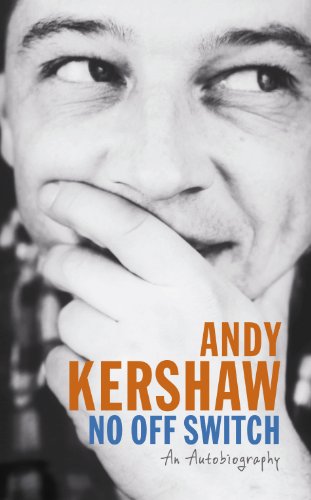 “Mr. Kershaw displays integrity in his journalism as well as a passion for music delivered from the heart—both of which lift this story well above the average celebrity bio.”

Andy Kershaw’s passion for music developed into a compassion for humanity. A youthful devotion to the songs and social awareness of the early Bob Dylan set author Kershaw on a career path that would see him reporting on genocide in Rwanda, human rights violations in Haiti, and from the secretive totalitarian absurdity that is North Korea.

The British broadcaster’s biography veers from passionate and angry about global injustices to bewildered and contemptuous of the smug celebrities among whom he moves during his time as a DJ on BBC radio.

Many of Mr. Kershaw’s anecdotes are primarily pitched toward a British audience from age 35 to those in their 50s who listened to the BBC’s pop music radio station Radio 1 during the 1980s and early 90s and who will remember the self-important celebs Mr. Kershaw takes great pleasure in mocking.

From the start Andy Kershaw was an outsider who, along with the late John Peel, tried to create a counterculture among the bland pop and stadium rock that prevailed on the air.

American roots music—blues, country, soul, folk, and, most importantly, African music from the township jive of the south of the continent, to the desert blues of the west and Arabic influenced rai of the north—were his standard fare, while his contemporaries treated their listeners to Bon Jovi, Hall and Oates, and U2.

Although he is wary of the term world music Mr. Kershaw is regarded as one of its foremost champions. He has brought to the attention of western audiences such bands as Ali Farka Toure from Mali and the deliriously brilliant Bundhi Boys from Zimbabwe.

Mr. Kershaw is also obsessed with American roots music and takes us on his journeys as disparate as finding the grave of bluesman Blind Willie McTell to discovering neglected artists, such as Ted Hawkins, and securing them record contracts.

Mr. Kershaw is an obsessive traveler and seems to seek out the most obscure and often dangerous corners of the globe to visit, often at his own expense, to file reports from for the BBC and a range of British print outlets.

He visited Haiti more than 20 times in the 1990s; reported on wars, massacres and famines from throughout Africa; and in recent years made a series of radio documentaries on the “Axis-of-Evil:” Iran, Iraq (when Sadam Hussien was still in power), and North Korea.

Introducing us to North Korea he writes: “It is the most volatile place on earth. Panmunnjom, at the 38th Parallel, where North Korea meets South, is also the world’s last Cold War frontier. Here, the ancient tectonic plates of capitalism and communism still grind relentlessly and terrifyingly together. Concealed in the surrounding countryside, on both sides of the border, beyond the trim lawns, fragrant flowerbeds and ornamental shrubs, is rumored to be the deadliest arsenal in the world, a concentration of chemical, biological, conventional and nuclear weapons. And all just a minute or two from the gift shop.”

Things becomes personal toward the end of No Off Switch as Mr. Kershaw recounts the breakup of his 17-year relationship with the mother of his two children—one that saw him suffering a very public nervous breakdown and incarceration for contacting his ex-partner when a restraining order was in place.

Mr. Kershaw’s tone can often become flippant; and he interjects his life story with frequent asides and observations. He is probably trying to address too many audiences from those who are interested in celebrity gossip to serious music-heads to those who will be gripped by his insights as a foreign correspondent.

Although often self-centered and keen to make sure we know his opinion, Mr. Kershaw displays integrity in his journalism as well as a passion for music delivered from the heart—both of which lift this story well above the average celebrity bio.