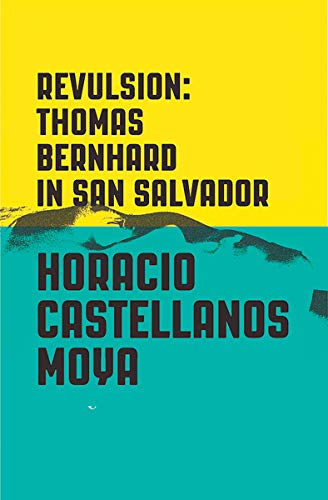 Anger and outrage drip from the pages of this short single-paragraph novel. It is a rant against a county, its people, and family.

In a postscript author Horacio Castellanos Moya recalls the death threats he began to receive a week after the original publication in El Salvador in 1997.

Without condoning the threats, it is not that surprising in a country where far right military juntas and armed leftist guerillas thrived that this novel managed to offend.

And that is just one of the tamer passages.

As the title suggests, Revulsion is written in the style of the Austrian writer Thomas Bernhard, a single, erratically punctuated paragraph running over 83 pages.

An expatriate art history professor called Vega has returned for the first time in 18 years from exile in Canada to El Salvador for his mother’s funeral and to claim his share of his inheritance.

The monologue is addressed to the author over a period of two hours on the terrace of a San Salvador bar where Vega has persuaded the barman to play Tchaikovsky before the evening crowds arrive and he will return to his hotel.

He contrasts his own high culture and education with his “unbearable” fellow countrymen and in particular his brother and his family who he has been staying with.

His rants loop, words and phrases repeat, to emphasize his disgust at a particular subject: soccer, the national cuisine, the education system, politicians, the way the city has been developed, music, the “diarrhea-inducing beer.”

In his postscript Moya writes: “I didn’t foresee that reactions, including those of some loved ones, would be so virulent.”

“. . . the bus drivers [in San Salvador] have been pathological criminals since birth, criminals converted into salaried bus drivers, said Vega, they’re guys who were no doubt torturers and participated in massacres during the civil war and now they’re recycled as bus drivers . . .”

How could anyone react negatively to that?

There are no loveable characters in this novel, no redeeming features, except for the fictional version of the novelist whom Vega seems to have a grudging regard for.

Vega’s most venomous discourses are reserved for his brother and his family, with their three televisions, including one at the kitchen table where they eat.

The last 10 pages demolish everything his brother and his wife and two children stand for. The brother is a small businessman in El Salvador with social climbing aspirations but who takes Vega out to get “f-d up” and ends up in seedy brothel.

Moya’s descriptions of this night are his most visceral, his horror and contempt for what he is witnessing the most highly charged.

Revulsion is not an easy nor pleasant read, but it has an energy and drive that carries the reader through, but prepare to be offended, especially if you are a bus driver from San Salvador.