My Fathers' Ghost Is Climbing in the Rain 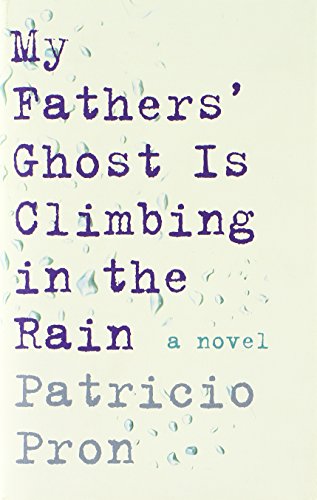 Memory is at the heart of this novel, individual and collective memory and the way the significance of past events shifts with time and retelling.

The Argentinian narrator immediately casts doubt on his own capabilities to effectively narrate when he tells us that large chunks of his past have been obliterated due to over use of prescription drugs.

He has spent nine years in Germany but decides to return to his homeland when he learns that his father is dying.

Between visits to the hospital the son starts sifting through his father's papers and discovers a collection of newspaper articles on the disappearance of a man from his father's home village.

The secondary story is assembled from archived newspaper reports telling of the man's disappearance, the search for him and the eventual discovery of his body.

Interviews with people who knew the man and police leading the search unfold in chronological order of their publications.

Versions of events and facts about the case contradict one another and once again the recorded memory of what happened becomes distorted.

The man's disappearance and those who were responsible for his death play out like a plot in a soap opera, but behind this secondary story lurks a third one and this is at the heart of Mr. Pron's novel.

The disappeared man's sister was a political activist, like the narrator's family, and she too disappeared in the 1970s during the reign of Argentina's military junta.

But the memory of her story is suppressed, partly due to the residual fear of that era but also the unwillingness of those who survived to confront the past.

This is a highly stylized novel in which the reader is required to assemble much of the plot from the documents presented.

The narrator takes great pains to point out the grammatical and factual errors in the newspaper reports and other documents, which is actually quite irritating after a while.

The chapter numbers are sometimes out of sequence. In Part One we jump from chapter 42 to 45 and then a few pages later from 47 to 49. Is this a novelistic technique to cajole the reader into participation in the narrative and confront the gaps in the narrator’s memory? Or is it simply bad editing?

Mr. Pron’s story only gradually unfurls and a full appreciation of his subtext demands engagement from the reader. The resulting experience is challenging but hugely rewarding—and deeply unsettling.