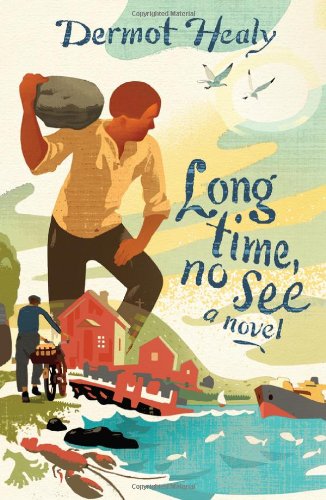 Stretches of long, rambling narrative, interweaving stories, and a gallery of characters reflecting the changing face of Ireland—all make up a novel that never seems to fully engage the reader.

The 18-year-old central character, Mr. Psyche, is constantly trying to distract himself from the trauma of a car crash. He spends most of his time with his uncle Joe Joe and his uncle’s friend, The Blackbird.

Gentle comedy, surreal twists, and free-flowing dialogue come together to ignite a slow burn. As old enmities resurface in the second half of Long Time No See, they shake up the slow moving pace of life in the coastal town where the characters live.

There is plenty to relish—not least Mr. Healy’s often poetic prose—but then what else would you expect from a poet?

“He washed the dishes, dried them, made ham sandwiches and a flask of tea and left a note for the mother, then we drove to the beach where his digger stood on the dunes. We put on our earmuffs. The beach looked like it was inhabited by aliens. Piles of small rocks had come in with tall pods of seaweed flowering from them. The roots clenched the stones with a drowning man’s grip. There were hundreds of them, standing up straight, going this way, that way. It was like a demented garden. I climbed into the bucket and we drove down toward a crowd of huge rocks brought inland by the storm. Then I got into the box behind him. It was freezing and full of draughts and the loud noise of bad memories.”

Long Time No See oozes such gems; however, readers of Mr. Healy’s superb novel from the mid-90s, A Goat’s Song, will be disappointed. The storytelling is still extant, but the edginess has been diluted, the drama sacrificed for comic effect.

Like Waiting for Godot, in which nothing happens—twice—not much occurs here either—in nearly 450 pages. Yes, there are minor dramas, revelations, denouements, psychological tension, but Long Time No See lacks punch.

Those who enjoy immersing themselves in a rambling, character-driven narrative can luxuriate in Mr. Healy’s northwest-of-Ireland accented prose, but at there is little in the way of plot and delivery. Long Time No See is a novel whose promise falls short.