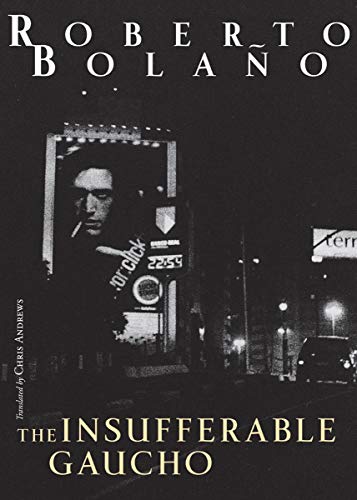 Even the most enthusiastic admirers of the late Roberto Bolaño must wonder sometimes if there is really a case for posthumously publishing everything that he ever wrote.

You could be forgiven for thinking that some of the material being presented as lost masterpieces originated as a few scribbled notes on a torn cigarette packet.

Certainly the first story in this collection, “Jim,” would seem to fit into that category—a brief sketch of the sort of character who weaves in and out of Bolaño’s novels, but who has gotten lost and ended up stranded here by himself with nowhere to go.

However, the other four stories and the two essays in this collection are pure Bolaño gold.
Álvaro Rousselot’s Journey, rather than the collection’s title story—“The Insufferable Gaucho”—is the stand-out piece.

Another writer could easily have spun out and entire novel from the premise, but in just under 40 pages Bolaño sets the scene, establishes his main character, takes him through a life-changing adventure, and leaves him on the final page psychologically battered and bruised but with new insights into the world.
Álvaro Rousselot is an Argentinian writer, working in the middle of the last century who realizes that the plots of his novels are being plagiarized by a French film director. Three of Rousselot’s novels are thematically outlined by Bolaño, and the character’s development as a writer analyzed before we are even 10 pages into the story.

It gathers pace when Rousselot is given an opportunity to travel to Europe with a delegation of Argentinian authors, some of whose characteristics are briefly outlined— does Bolaño want us to identify them as Borges or Macedonio Fernandez?

When the rest of the delegation returns to Europe, Rousselot travels to Paris where he intends to confront the plagiarist film director.

However, he becomes caught up in a swirl of debauchery, drink, and a passionate affair with a prostitute. The scenario has all the hallmarks of a 1970s French movie—perhaps Bolaño knowingly plagiarized the trope, in a self-knowing reversal to the premise of his short story?

The final story is also worth mentioning. “Two Catholic Tales” contains a pair of seemingly disparate narratives that suddenly come together in a twist that Roald Dahl would have been proud of.
Of the two essays which round off the collection, “Literature + Illness = Illness” is the most illuminating, giving us an insight into Bolaño’s psyche as he comes to terms with his own terminal illness. It is not as grim as it sounds and we are given some enlightening insights into the late Chilean’s take on poetry and poetic inspiration.

The Insufferable Gaucho will please existing Bolaño aficionados and serve as a good introduction to newcomers.