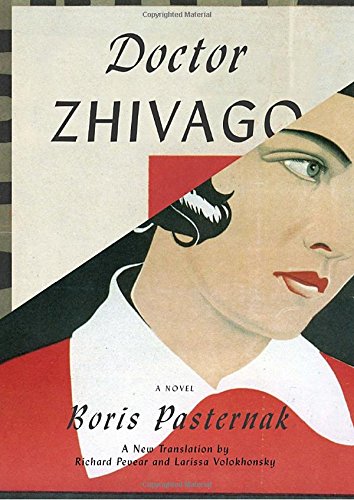 Dr. Zhivago is a big book, physically and in terms of its themes, multi-stranded storylines and historical backdrop. It is a character-driven novel whose subjects live intense, interweaving lives set against the great sweep of early 20th century Russian events.

At its heart is the eponymous Dr. Yuri Zhivago and his relationship with two women: his wife Tonya and his lover Lara. A supporting cast weaves in and out of the novel, manipulating, inspiring, intimidating, interacting and sometimes simply just being in the vicinity of the central trio. Although the First World War, the Bolshevik Revolution, and subsequent civil war in Russia form an historical backdrop, their keynote events are hardly mentioned. It is history’s impact on individuals that concerns Pasternak.

However, Zhivago struggles to maintain his individuality at a time when individuals are regarded as canon-fodder to be sacrificed by Czarist Russia in its war against Germany while those who survive find themselves thrust into a fledgling society ruled by the Bolsheviks who regard concepts such as individualism as outdated and dangerous.

Zhivago and those close to him are mere bit-players in the huge social upheaval in which they are being swept along, but Pasternak plucks them from obscurity to dissect their psyches and put a human perspective on the times in which they live. As millions die during wars and famine, Zhivago is torn between his love for Tonya and Lara and the betrayals that this inevitably brings.

His poems, collected at the end of the novel, serve as an alternative narrative, charting his internal obsessions and yearnings. This is a new translation of a novel that is already well established in the canon of great 20th century fiction. For those who have copies of the translation by Max Hayward and Manya Harari on their shelves it is tempting to occasionally compare the two versions.

A key passage is one in which Zhivago reflects on the death of the woman who raised him and how this family tragedy and the emotions it stirs in him can be transformed into something positive. In the 1958 translation by Hayward and Harari the passage reads: “In answer to the challenge of the desolation brought by the death into the life of the small community whose members were slowly pacing after him, he was drawn, as irresistibly as water funneling downwards, to dream, to think, to work out new forms, to create beauty.” While Pevear and Volokhonsky render this as: “In response to the devastation produced by the death in this company slowly walking behind him, he wanted, as irresistibly as water whirling in a funnel rushes into the deep, to dream and think, to toil over forms, to bring forth beauty.”

Both translations work as an image of the poet reworking a real life tragedy to write verse, but the new translation seems to suggest that this is an innate “response” by Zhivago, rather than a considered “answer.” And then there is the more psychologically nuanced image of water (experience) rushing “into the deep,” with all its inferences of the subconscious, as opposed to the water merely “funneling downwards,” while in the just-published version he “brings forth beauty (poems)” rather than simply creating them.

Perhaps such detailed comparisons are reading too much into what is simply a fresh perspective on Pasternak’s original Russian text. But then Zhivago is, as was his creator, a poet and a complex person whose story lends itself to poetic prose that brings to life the various layers of his persona and the psyche that lies behind it.

At its simplest level, this new translation, extensively annotated to explain the more obscure references, is a welcome opportunity for anyone who has already read Dr. Zhivago to revisit it and experience a richly rewarding fresh take on an epic tale. For those coming to it for the first time it is a chance to read one of the greatest novels of all times.