From Out of the City (Irish Literature Series) 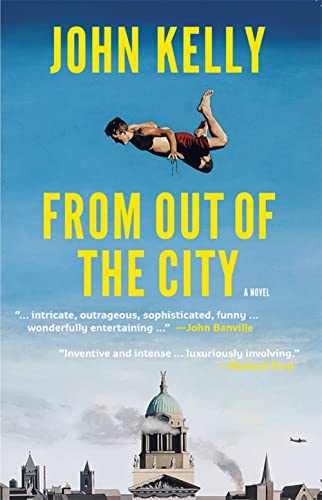 “Often the prose often becomes functional, leaden—rhyming off lists, dates in history, naming streets—but this serves to accentuate the more lyrical passages, the flecks of gold glinting in this uneven but ultimately rewarding read.”

Like a literary alchemist John Kelly throws in sprinkles of history, social commentary, sketched-out lives, psychological insights, and an abundance of place names into his crucible. What emerges is not necessarily a gold nugget, but a few flecks do glitter along the way.

Set in 2040, in From Out of the City the meanderings of main character Schroeder around a dystopian Dublin inevitably suggests a nod to Ulysses. George Orwell’s 1984, Franz Kafka’s The Trial, and even Philip K. Dick’s The Man in the High Castle also come to mind, as does the metafiction of Flan O’Brian.

Using his narrator, Monk, to interpose his authorial voice Kelly writes: “This is an honest and faithful record of breakage and distress at a time when  dysfunction was everywhere and anywhere.”

The plot, which limps along slightly in the first half but kicks into gear for the finale, is centred around the assassination of U.S. president Richard King: “A proud Memphian, he was a cigar smoker, a pill popper and an alcoholic.”

King is in Dublin to visit his daughter, Princess, who is studying at Trinity College which has become a fortress surrounded by armed guards and missile launchers to protect the president’s daughter.

Monk watches events from his rundown garret in Dún Laoghaire, spying on the main protagonists, hacking into their computers, phones and Dublin’s network of CCTV cameras to witness events unfolding.

He pays particular attention to Schroeder, a former Trinity lecturer and author of Lucky’s Tirade (ah yes Beckett is in there as well).

Schroeder is badly messed up, imbibing a daily cocktail of pills, alcohol and the noxious polluted air of a globally warmed Ireland. The waters of Dublin Bay, where a U.S. warship is permanently anchored, are poisonous, the Emerald Isle is, like Shroeder, falling apart.

There is high comedy here but often the tone of From Out of the City is despairing, a prophetic warning of how Kelly sees Ireland mutating and pointing the finger at those who are to blame.

On a train Schroeder sees “. . . a huddle of schoolboys on the platform. School uniform from the waist up and, from the waist down, shorts, bare legs and the dried rugby-mud of privilege. Little tadpole lawyers and doctors—perfect cross breeds between the cheekboned princesses of Southside Dublin and the gormless gods from across the avenue. All of them complicit in what is happened. In sucking the soul out of the place. The nation. In capitulating to vulgarity at every turn. In raising the accountant above the medic, the socialite above the poet, the general above the pianist, the professional shit above the man who might possibly fix your head.”

The truth behind the assassination of President King and how Schroeder is linked comes as an ingenious twist to the tale, shifting all that went before into a new perspective. A second revelation on the relationship between the voyeuristic narrator Monk and those he is monitoring is not really that big a revelation once it is named but helps put his spying into context.

The prose often becomes functional, leaden—rhyming off lists, dates in history, naming streets—but this serves to accentuate the more lyrical passages, the flecks of gold glinting in this uneven but ultimately rewarding read.