Elegy for April: A Novel (Quirke) 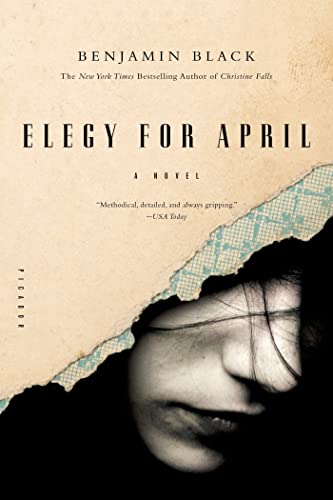 The weather is like a character in this novel, lingering in the background and occasionally being given a few lines. Fog seems to permeate the streets of 1950s Dublin, swirling like an ominous, omnipresent deity, its tendrils creeping along pavements and under doors to invade the sanctity of homes.

Benjamin Black is almost Joycean in his delineation of the city’s geography, name-checking streets, bridges, buildings, hotels, bars, parks, canals, and rivers. His strength is in creating an atmosphere. There is a real sense of time and place as dray horses pull carts loaded with Guinness and tinkerwomen dressed in tartan shawls beg for money on the pavements. Even the poet Patrick Kavanagh makes a cameo appearance.

Elegy for April is the third Benjamin Black novel to feature the alcoholic pathologist Quirke, his daughter Phoebe, and a number of other ensemble characters.

April Latimer, a wayward friend of Phoebe’s has disappeared, and no one from her estranged and influential family—which includes an uncle who is a government minister and a brother who is a senior surgeon—cares.

Phoebe urges Quirke, who is drying out, to get involved. As in the previous two novels in which he appears, Christine Falls and The Silver Swan, Quirke doesn’t really do that much detective work.

If there is a flaw with Benjamin Black’s novels it is the lack of plot. The narrative tends to meander along on the back of a series of set-pieces, vignettes, and character sketches. There is no skilful drawing together of carefully placed pieces of information from earlier chapters to jerk the reader into a sudden realization of what has been happening all along.

Instead, about 15 pages from the end a character simply explains everything, like Velma in “Scooby Doo,” telling us exactly who the baddie was and why he did it. Aside from that flaw, there is a shocking dénouement that has the reader’s eye tripping over the pages to get to the next line.

Benjamin Black is, of course, the crime-writing alter ego of Booker Prize-winning novelist John Banville, possibly modern-day Ireland’s most accomplished novelist who is to Irish fiction what Seamus Heaney is to poetry.

This reviewer went to hear Banville reading last year. He speaks in the third person when talking about his writing and said that in the time it takes “John Banville” to write a sentence “Benjamin Black” would have finished a page. Despite the languorous pace of the writing of it, a Benjamin Black page still has the feel of a well-crafted artifact, if not the intricately carved art of a John Banville paragraph.