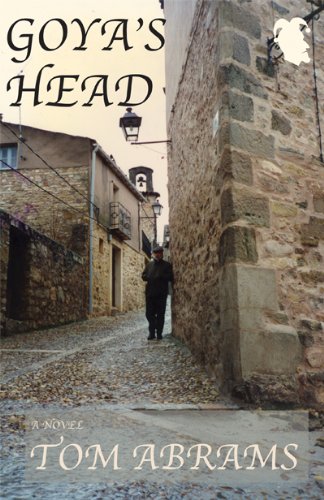 Reading this novel could leave you with a huge hangover—the amount of alcohol consumed by its narrator and his cronies is astounding and would have floored even Charles Bukowski.

In some ways Abrams’s fictional persona and writing is slightly reminiscent of Bukowski himself: a hard-drinking misfit most comfortable living at the fringes of society.

James Joyce also comes to mind, for Abrams takes us on an odyssey through Madrid, navigating its streets, plazas, parks and, of course, bars in the same way that Joyce’s Leopold Bloom did through Dublin in 1904.

Much of the time Goya’s Head reads more like a travelogue than a novel. You can almost picture the author sitting at a sidewalk café and scribbling notes and observations on a paper napkin before transcribing them and pasting them into his narrative.

That is not a piece of incisive criticism; the author tells us that this is precisely what he is doing, and the writing of the narrative that we are reading becomes a minor strand of the plot.

Lucas, the narrator, is living in Madrid with a younger woman, Megan, whose full relationship to him is only gradually revealed. She is the adopted daughter of his half-brother, but from the start there is always the suspicion that there is more to it than we are being told.

While Megan studies Spanish and teaches English, Lucas drifts around the city and drinks: three bottles of wine a day is his usual, along with beers and occasional spirits.

Lucas can get by in Spanish but struggles with the finer nuances of the language as indeed with life in Madrid.

The novel’s title, Goya’s Head, is a symbolic reference to how Lucas feels. The Spanish painter’s body is buried in Madrid but his head is missing, possibly in France or in some other part of Spain. For Arbams that sums up the ex-pat experience: the body may be in the country where someone is living but their head is somewhere else, in their homeland or in a parallel place that doesn’t quite relate to the adopted country as it is experienced by the natives.

Lucas has a number of cronies, mostly ex-pats like himself from Florida and other English speaking countries, whose attempts, or in some cases stubborn refusal, to become Madrilleños he chronicles and sometimes implicates himself in.

Into this narrative Abrams weaves reminiscences from his hometown and strands of family history.

In some ways the travelogue aspects hinder the story’s development, but then as Abrams states in his first-person blurb: Madrid itself became a character while he was writing and anyone who has lived or spent any time there will find themselves nodding knowingly as they recognize a street, bar, stock character, or quirk of life reminiscent of the Spanish capitol.

This is a story that anyone who has lived abroad will relate to: living in a city, trying to embrace the lifestyle, culture, and simpler way of being, but never quite getting it—always being an outsider.