A Death in Summer: A Novel (Quirke) 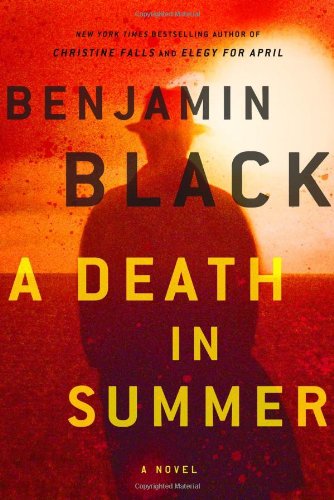 “This is an elegant novel, well-paced with dramatic twists, disturbing surprises and richly drawn characters whose actions and motives have a tangible psychological depth.”

Richard “Diamond Dick” Jewell is found in his country home with his head blown off and a shotgun in his hands, but Dublin pathologist Quirke and the Detective Inspector Hackett quickly conclude it is a clumsy attempt to make the death look like suicide.

Benjamin Black quickly lines up a cast of suspects for the murder of the Dublin newspaper magnate and horse breeder in the fourth novel to feature Quirke.

A bitter business rival and his instantly dislikable and creepy son, a stablehand with a violent criminal record, a sullen housekeeper, the dead man’s deeply disturbed sister and his exotic French wife all enter the frame.

Quirke, as usual, is quickly out of his depth, not least because he begins an affair with the Gallic widow before her husband is even cold in his grave.

Again he is struggling with alcoholism, drinking but trying to control it, his entire body quivering for more each time he sips a glass of wine.

Over the previous novels Black has assembled a retinue of supporting players, including Hackett and Quirke’s daughter Phoebe. But stepping from the sidelines of two-dimensional bit-player to take second billing this time round emerges Quirke’s assistant pathologist, Sinclair, to become a fully rounded character with hidden depths.

Author Black spends less time than in his earlier Quirke novels establishing the time frame of 1950s Dublin, just an occasional reference to the location of a long-flattened building or now-defunct tram line.

But as before he paints a scathing picture of establishment corruption and an Ireland still dominated by the Catholic Church, which allows elements of its clergy to commit appalling crimes against children in its care.

Moreso than in his previous pseudonymously penned novels by Benjamin Black, the voice of Booker prizewinner John Banville, keeps emerging from the pages of A Death in Summer as if he wants to push aside his crime-writing alter ego and show him how things should be done.

“They left the kitchen and went back to the nook in the dining room. The night was pressing its glossy back against the window. The candle had burned halfway, and a knobbly trail of wax had dripped down the side and onto the table. Quirke lifted the bottle of Bordeaux.”

In four sentences the straightforward storytelling prose of the crimewriter Black morphs in the prosaic lyricism of Banville and back again to functional narrative.

This is an elegant novel, well-paced with dramatic twists, disturbing surprises and richly drawn characters whose actions and motives have a tangible psychological depth.

Mr. Black/Banville is well in form here, and this is probably the most assured of his Quirke novels. It can be either plunged into without any need to reference the previous three or else taken as a welcome new installment of a sequential quartet by one of Ireland’s leading contemporary novelists who barely disguises himself behind his crimewriter penname.