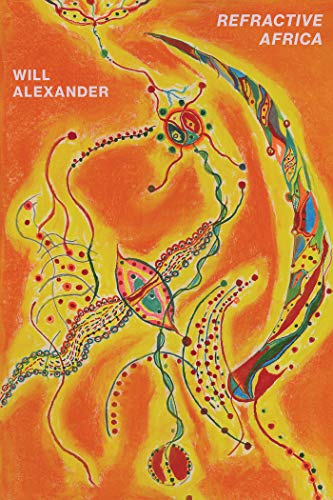 A rich matrix of language, obscure or arcane vocabulary, ever-shifting waves of imagery and a kick back against historical colonial injustices feed into this alchemical volume of verse.

In his introduction Will Alexander outlines a brief history of slavery and colonialism that scattered and subjugated the peoples of Alkebulan, “Africa’s original appellation.”

The very name Africa is a name imposed on the continent by those who invaded, looted, enslaved, and massacred.

The continent and its inhabitants have been defined by a European perception that has “distorted” it and the minds of those who still live there or people in other parts of the world whose forebearers were forcibly removed.

In his introduction Alexander writes of “those whose thoughts remain white yet whose skin remains decidedly Black.”

Refractive Africa is a poetic attempt to restore a world view that is closer to that of the sangomas—“psychophysical healers”—of Alkebulan.

Alexander writes: “This African state of mind maintains an oscillating complexity that connects less quantifiable states of mind with what I understand to be alchemical respiration, which introduces a more penetrating apperception of reality.”

Obscure vocabulary had this reviewer scurrying to a dictionary and while there is an extremely helpful glossary—a revelatory section in itself—even it was not adequate to check up on all Alexander’s references.

Split into three sections, in the first and third he takes on two of Africa’s foremost writers as his guides.

Nigerian novelist Amos Tutuola, and his second novel My Life in the Bush of Ghosts, is Alexander’s starting point for the first section.

Tutuola’s novel tells of a boy who is lost in a forest, inhabited by ghosts and monsters, but who becomes used to this new existence until he is shown the possibility of escape.

For Alexander this seems to suggest a symbolic escape back into an “African state of mind” and an alternative way of perceiving reality.

The second section focuses on The Congo, a country that still carries the scars of Belgian colonialism, particularly under the monstrous King Leopold II. The Congolese suffered genocide, mass mutilations, and exploitation as their European rulers plundered the region’s natural resources, only achieving independence in 1960.

According to Alexander the collective psyche and indigenous identity has been warped by is subjugation by the Belgians: “we believed part of our galaxy was centred in Liege.”

However, his narrator has broken from those colonial bonds: “. . . as Akashic freed man/ I am able to peer through & beyond/ the pitch of European corrosion and its attendant psychic confusion . . .”

Reclaiming languages that cross European imposed national boundaries is a kick back. In the glossary we are told that Gur, Senufo, Sangho, and Adamawa-Ubangi are “languages little considered in the West as conveyers of meaningful psychology.”

Refractive Africa becomes a counterpoint, another way of being to the corruption in the Congo, the legacy of foreign rule in terms of subversion through the imposition of the French language and the Christianity of the colonial invaders.

“. . . my voice/as sweltering warlock in the Congo/formed from alien council with owls/as I shape-shifted via sorcery and confusion.”

The final section of this collection focuses on  Jean Joseph Rabearivelo, from Madagascar, whose  poetry shifted between nature, place, dreams, and symbolism.

According to Alexander’s glossary he was “fascinated” by France, which colonized the island and brutally supressed resistance with the slaughter of tens of thousands over many decades.

The status of the colonized and the attitude of the colonizer is embodied in Rabearivelo: “. . . yet you were never given due/entrapped by blinded colonial leprosy/that kept you chained as static posture wandering in your own privation.”

Refractive Africa is not poetry to soothe the soul, it is full-on, intense, difficult, obscure, and angry but ultimately compelling and visionary.