The Mountains of Parnassus (The Margellos World Republic of Letters) 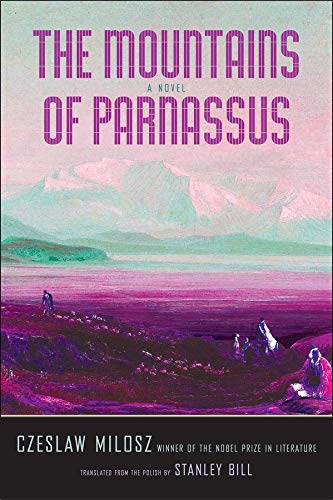 An unfinished science fiction novel by Nobel Prize winning poet Czeslaw Milosz . . . sounds intriguing doesn’t it? Unfortunately the pitch is much stronger than the final product. In terms of plot, it is virtually nonexistent.

The first 20 pages or so are used by translator Stanley Bell to explain the origins of the manuscript and why it was never completed, along with quotes from Milosz himself and his agent Jerzy Giedroye.

Commenting on the manuscript in a letter to Milosz, Giedroye wrote that it was a “not very successful attempt at a novel.” To which Milosz responded, “If you don’t like The Mountains of Parnassus, then don’t print it. My own attitude to the work remains undetermined.”

Which begs the question as to why it has now been published nearly 13 years after the Lithuanian-born, Polish speaking, Californian-dwelling poet’s death.

As a novel it is a total failure. But as a process, a workbook in which ideas are worked out, themes are developed, a style of writing tested and evolved, it is fascinating. That is, the ideas are interesting for the scenarios are never fully realized, but they hint that a decent novel could have resulted if Milosz had persisted.

It would have been as much a vehicle for ideas rather than an innovative science fiction story, but then the best scifi writers (for this reviewer, a mere dabbler in the genre, Philip K. Dick, Robert Heinlein, and Michael Moorcock) are as much about ideas as plot.

The Mountains of Parnassus focuses, or rather zooms briefly in on, four main characters: a cardinal, an exiled prophet, an astronaut who is hundreds of years old, and a rebellious young man who contemplates suicide.

The society they live in is totalitarian and the masses docile; technology reigns supreme, while imagination and poetry are sidelined and derided.

Milosz laments the dominance of western Christianity and seems to yearn for the gnostic ideas that it suppressed and demonized.

There are startling passages: “Ordinary people perceived a world reduced to a mere function of the mind as a pale, unreal, and repulsive one; consequently, just as their bodies rejected unhealthy food, they refused to assimilate a knowledge that seemed to degrade reality.”

For those unfamiliar with Milosz’s poetry the introduction by Stanley Bell gives an overview and contextualizes his failed novel with the poetry he was writing alongside it, in particular From the Rising of the Sun.

Ultimately The Mountains of Parnassus has to be filed under the category of “curio,” a novel that fails on almost every level and yet gives a glimpse into the mind and thought processes of a genuine 20th century literary giant.